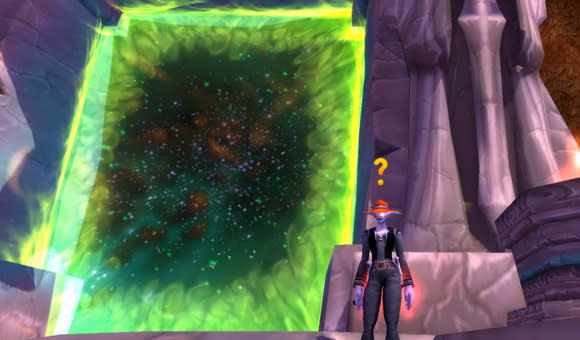 The winds of change are howling through the mountain passes ahead. From the path on which we're walking, up a hill toward the mouth of the first pass, we can't see what's up there yet. But we know change is coming. We can hear it in the whoosh of air sweeping past those stone walls. The warlords are coming, the wind whispers. In the new expansion, rogues will not be the same.

But how will our class change? Rogues aren't utterly broken, but they do remain consistently unpopular (they make up roughly 6.5% of all level 90 toons in the U.S. and Europe, according to the latest RealmPop figures; only the still-new monk class comes in lower, and not by much), and senior designers have repeatedly expressed a desire to do something about it. Not a Warlock-level degree of change, but something.

Going into BlizzCon last month, many of us may have had hope that a solid look into our future would be offered at the convention. But we -- like most every other class -- got more of a teeny glimpse. Some of the key questions we have about the future of roguedom remain unanswered.

But, wait: What are those key questions?

As you lovely people may or may not recall, several weeks back I encouraged y'all to sally forth with the single question you'd ask WoW's designers about the rogue class if you had the chance. You replied in comments, you replied on Twitter -- and like a good rogue (I get a biscuit!), I watched, and listened, and learned. I've also seen what players have to say in forums, blogs and a few other places. And I've gotta confess: Some of the main themes I saw differed from the sorts of questions that I would have asked.

Here are three of the primary questions for WoW's design team that I've seen emerge from our communal discourse over the past few months. (We'll talk about each one in more detail over the next few weeks; for now I'll keep stuff general, and we can chat a little more in the comments or on Twitter.)

What are you going to do about stealth?

The most common thread that linked together many of your questions and concerns revolved around how to make stealth more interesting -- in virtually all aspects of the game, PvP and PvE alike, whether questing or raiding or in arena.

This fascinates me, because stealth is already at the core of what makes rogues special. The ability to land an opener from (or use crowd-control abilities while in) stealth is often absolutely critical in PvP, for instance. While doing so is of considerably less value in most PvE situations, it can still be highly useful during solo and non-raid group play.

The problem, as many of you pointed out, is what happens after the opener lands. Once a rogue leaves stealth at the beginning of an encounter, it tends to remain out of stealth for the duration. Sure, we've got Vanish, but its cooldown is so long that its use in PvP tends to be highly strategic and situational rather than a recurring aspect of our gameplay, and in PvE it's typically only used as either a rare lifesaving tool or as an overly complicated (and quite minor) DPS boost.

What's missing, many of you seem to feel, is the sense that stealth is a regular, constant aspect of our WoW existence -- especially at the end game, and especially especially in areas of the game that don't center on questing or exploration.

For me, this raises a couple of sub-questions I'd like to ponder with ye alls: How would we want to see stealth more heavily integrated with our gameplay? Would doing so truly be good for the class, and the game as a whole?

How are you going to make playing a rogue feel more unique?

A recurring theme in many folks' comments and posts -- particularly those who have been playing this game for several years now -- is the feeling that lockpicking, de-trapifying and free-item-removal ain't as fun as they used to be. Seems like a really minor thing, right? Why should it matter so much whether more NPCs are wearing pants inexplicably stuffed with useless flavor items (or, extremely rarely, epic lootz), or whether marginally consequential raid mechanics can be avoided thanks to an observant rogue? I have some thoughts I'll share in the future, but the bottom line is, it clearly matters to a lot of you. I saw a clear desire for there to be more of those moments where a person playing the class can say to themselves, "Only a rogue could have done that."

What I did not see much of -- and this surprised me a little -- were complaints that the three rogue specs were too similar. This felt like a pretty frequent drumbeat throughout much of the expansion, and it's a concern that clearly resonates with WoW's class designers, so I'm not saying the issue is somehow magically dead. It just looks like, when push comes to shove, more of you seemed to care much more about the overall nature of the class than about similarities or differences between each individual spec. (Although, yes, a number of you called for rogues to gain a tank spec, ranged spec or even a healing spec, you sacrilegious heathens.)

How will you give us more control over the damage we deal?

A lot has been made during this expansion, especially among theorycrafters, about assessments that a large chunk of rogue damage is "passive" rather than "active" -- that is, much of the pain we dish out happens without us having to press buttons at all.

All of that is mostly just fancy talk for one central wish that many of you seem to have: When we mash a button (or a properly mashed series of buttons), we want to feel like it's really doing something, not like it's just another drop in our DPS bucket.

This concern tends to be more of a reality on the PvE side of rogue gameplay -- particularly in raids and dungeons -- than on the PvP side, where players use a larger chunk of their rogue spellbook and strategize the use of abilities in a way that often makes every button push deeply matter. (This, in fact, is one reason why rogues are traditionally tricky to balance in competitive PvP: They very much fall into the "easy to learn, hard to master" bucket, which historically has left players who lose to skilled rogues feeling like the class is overpowered, while the vast majority of us who aren't rogue-wizards perpetually felt weak.)

In PvE, the gap between the rogue student and the rogue master feels uncomfortably small to many seasoned players right now, and that's causing some consternation. Beyond that, though, there seems to be a sense of discontent that rogue gameplay doesn't feel engaging enough -- with the possible exception of our major DPS cooldowns (such as Adrenaline Rush and Shadow Blades), which provide brief bursts of high activity between much longer stretches of relative monotony (though the monotony certainly drops when we're fortunate enough to have a shiny like Assurance of Consequence equipped).

What exactly may be causing that discontent -- and what to do about it -- is a topic for us to venture into another day, along with the other major class questions you've raised. Hopefully, our conversation can help prepare us all (class designers included, we can hope!) for what may lie in those mountain passes ahead, as the winds of change swirl around the rogue class.

Sneak in every Wednesday or two for an early glance at rogues in the upcoming expansion, a look at the eight key things you should keep in mind when leveling your rogue -- and of course, the answer to why we'll always be the bad guys.
In this article: featured, rogue-changes, rogue-info, rogue-questions, warlords-of-draenor, wow-rogue, wow-rogue-info, wow-rogues
All products recommended by Engadget are selected by our editorial team, independent of our parent company. Some of our stories include affiliate links. If you buy something through one of these links, we may earn an affiliate commission.