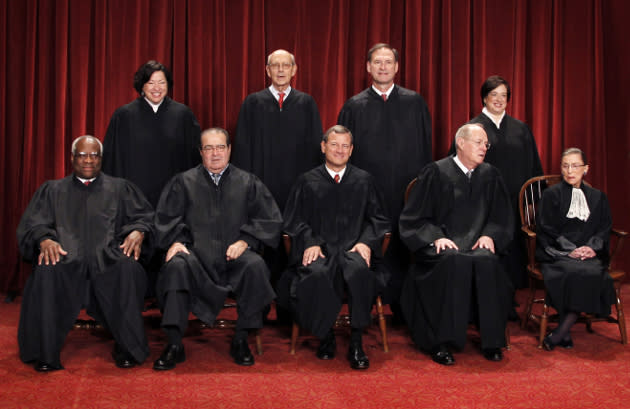 The US Supreme Court is wading into the battle over software patents by agreeing to hear a case between two financial firms you've likely never heard of. This comes just as the legislative arm of the government is getting ready to address the problem of patent trolls. (There's not much Republicans and Democrats can agree on, but a hatred of trolls is apparently one of them.) The hope is that both the Supreme Court and Congress will address what many see as the largest problem with the American patent system: low quality patents and frivolous law suits.

Alice Corporation, which runs a derivatives market, charges that foreign currency exchange firm CLS Bank Internation violated a number of its patents relating to computer-based trading systems invented in the 1990s. The defense has argued that four of the patents in the question are invalid, and twice lower courts have agreed with them, both in March of 2011 and in May of this year. The most recent ruling, handed down by a divided appeals court, found that Alice's claims were too vague to be protected under patent law.

But critics, including the Electronic Frontier Foundation, found the decision wanting. The advocacy group argues that the Federal Circuit Court came down on the right side in 2011, but it failed to explain its decision in clear enough terms, leaving lower courts with questions over how to handle future cases. What's more, it has since upheld equally abstract patents, such as Ultramerical's claim over online pre-roll advertisements, which could impact companies like Hulu and YouTube as well. That suit, which the company filed against WildTangent, was also up for consideration by the Supreme Court, but it declined to hear the case, despite urging from industry giants like Google, Facebook and Netflix. Many of those same same companies, however, have filed friend of the court briefings in the Alice v. CLS debate.

Current law prevents claims to abstract ideas and natural phenomena, but companies have exploited a loophole by filing patent claims for computer systems or software that implement those abstract concepts (for instance, music playlists). Obviously, whatever conclusion the Supreme Court reaches will have widespread effects. While the American Invents Act, which President Obama signed into law in 2011, moved the US to a first to file system (instead of first to invent), it was bereft of other major reforms that many were seeking. If the Court sets a higher bar for upholding existing patents and the new Innovation Act bill becomes law, making it harder for companies to claim ownership over ideas that are overly vague or abstract, we may finally see meaningful modernization in our patent system. Then maybe, just maybe, you'll never have to read another article about Personal Audio or Intellectual Ventures.

In this article: AliceCorporation, cls, clsbankinternational, lawsuit, patent, PatentInfringement, patentreform, SoftwarePatents, supremecourt
All products recommended by Engadget are selected by our editorial team, independent of our parent company. Some of our stories include affiliate links. If you buy something through one of these links, we may earn an affiliate commission.