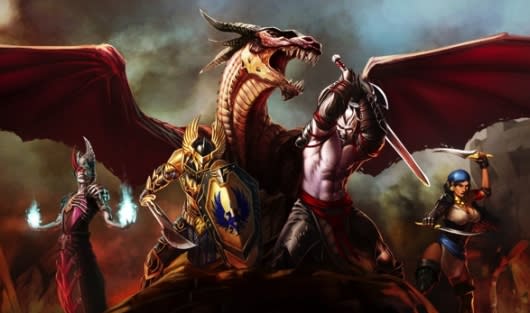 The New Console Age and Black Friday Age are dead, let the Dragon Age begin; Heroes of Dragon Age, a free-to-play strategy game developed and published by EA, is now available on the Google Play and iTunes stores.

Heroes of Dragon Age combines elements from strategy games, collectible card games and traditional RPGs by having players earn - or purchase - a collection of heroes with varying stats, which they then mix and match before heading into combat with them. The characters are rendered as 3D models arranged in lines across the battlefield, and the fights themselves play out automatically.

The next proper installment in the Dragon Age franchise, Dragon Age: Inquisition, isn't due until fall of 2014, so you've got plenty of time to start collecting. No need to be dragon your feet, huh? Huh?
Show full PR text
Heroes of Dragon Age Now Live on the App Store and Google Play
Strategic Combat Game Available on iPhone, iPad, iPod touch, and Android Smartphones and Tablets Worldwide

For Dragon Age fans worldwide, the wait is over. Today, EA announced the launch of Heroes of Dragon Age on the App Store and Google Play. Called "the free-to-play fight franchise Dragon Age fans have been waiting for" by Inside Mobile Apps, Heroes of Dragon Age lets players collect legendary Dragon Age heroes from across the Dragon Age universe and bring them to life in strategic 3D combat. Aspiring Dragon Age masters can battle other players worldwide and fight bosses on engaging quests from the award-winning, dark fantasy RPG games. There are more than 100 heroes to collect, including rare dragons, giant golems and other devastating creatures – each with unique abilities, stats, and factions. Players can enhance their squad's power by consuming and combining heroes and deploying a variety of runes.

With stunning graphics and amazing special effects, Heroes of Dragon Age is a mesmerizing game that rewards players who develop winning squad formations with trophies and leaderboard dominance, while also enabling them to relive places, times, and storylines straight from Thedas.
In this article: android, dragon-age, ea, heroes-of-dragon-age, ios, ipad, iphone, mobile
All products recommended by Engadget are selected by our editorial team, independent of our parent company. Some of our stories include affiliate links. If you buy something through one of these links, we may earn an affiliate commission.