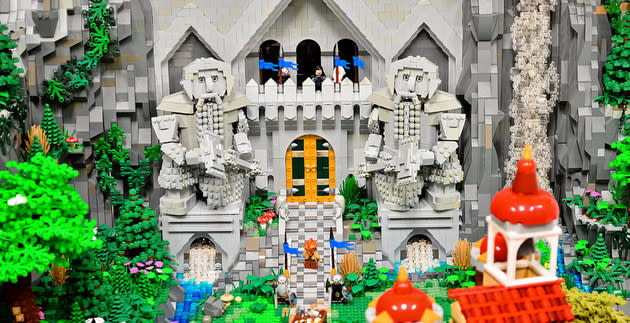 At this time of year, you tend to see lots of cars with Christmas trees strapped to their roofs. But that could become a less common sight due to climate change -- extreme weather events are making life harder for tree farmers, causing tree shortages in the northeastern US. As an alternative, Inhabitat rounded up a list of this year's top eco-friendly faux Christmas trees. In New York, this year's Rockefeller Center Christmas tree is lit up with 45,000 solar-powered LED lights. In the spirit of the season, Russian photographer Alexey Kljatov took some stunning macro photos of snowflakes by hacking a cheap Canon PowerShot. Inhabitat also unveiled its annual green gadget gift guide, and we shared the real story behind the "design" of Christmas (hint: It involves Santa and 'shrooms).

An Icelandic renewable energy company is planning to turn CO2 from volcano emissions into fuel. The scheme is still very expensive, but it has great potential. In other energy innovations, a Mexican entrepreneur has developed technology that generates electricity from the movement of vehicles and pedestrians. The concept could transform freeways and sidewalks into renewable energy generators. A team of researchers from Northwestern University has developed a product that can harness energy exerted by jogging and use it to charge mobile devices. On the policy side of things, last week, President Barack Obama ordered the US government to triple its use of renewable energy. And solar energy production continues to climb: In 2012, the US increased its solar PV generation by an impressive 83 percent.

In green transportation news, the MIT-designed Copenhagen wheel can turn any bike into a "smart electric hybrid" -- and it just hit the market. Massachusetts-based company Superpedestrian is finally accepting pre-orders for the wheel. In London, a crowd of more than 1,000 cyclists staged a protest last week after six cyclists were killed in collisions with motor vehicles in just two weeks. Volvo just unveiled plans for the world's first large-scale trial of self-driving cars. As part of the test, 100 autonomous vehicles are set to hit the road in Sweden in 2017. Electric vehicles are doing more than just transporting people from place to place: In Japan, Nissan Leafs are being used to power entire buildings as part of an early test of the "vehicle-to-building" technology. And in Germany, a spectacular new metro station in Leipzig is made from glowing glass blocks.

The drones are coming -- to deliver your online purchases. Amazon CEO Jeff Bezos recently revealed that the company is developing an experimental shipping service that uses unmanned octo-copter drones to deliver goods to customers. "One day, Prime Air vehicles will be as normal as seeing mail trucks on the road today," Bezos said. As 3D printing technology advances, it seems there's hardly any object that can't be digitally fabricated. British architect Adrian Priestman recently designed the world's first 3D-printed building elements -- a set of complex joints that hold up a plastic roof canopy in London. In anticipation of the second Hobbit movie, a couple of teenagers used 80,000 Lego pieces to create a perfect replica of the Kingdom of Erebor. Microsoft created a sensor-equipped bra that monitors stress and discourages emotional eating, while a team of designers from Asia University developed a sign language ring that can translate hand movements into spoken words. And finally, we featured a fun set of circuit stickers that turn kids' artwork into an interactive light show.

In this article: copenhagen wheel, eco, eco friendly, green, inhabitat, lego, legos, mit, resources, sign language, transportation
All products recommended by Engadget are selected by our editorial team, independent of our parent company. Some of our stories include affiliate links. If you buy something through one of these links, we may earn an affiliate commission.