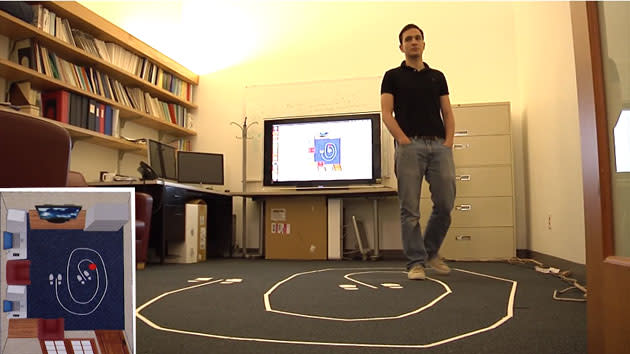 Even if you hide behind a wall, MIT's 3D motion-tracking tech can still see you. It can even tell if you've "fallen and can't get up." Sure the tech sounds invasive, but the team's WiTrack (as it's been dubbed) device is actually less intrusive than Microsoft's Kinect -- there's no camera watching your every move. Nor is there any wearable tech involved. Instead, the setup relies solely on a wireless network and your body's ability to bounce back those radio waves.

These relatively weak signals, said to be about 1,000x less powerful than that of a smartphone and 100x less than a typical WiFi network, are transmitted throughout a home environment where they'll then reflect off of surrounding objects and be read by three transceivers to determine your location. Obviously, this poses a significant problem those of us with furniture, as we can't all abide by a German minimalist aesthetic. To counter this signal noise, WiTrack makes use of an algorithm to sift through the clutter and mark your location at up to 97 percent accuracy for falls or "10 to 13cm in the x and y dimension, and 21cm in the z dimension" for general movement. So as a tracker, it's pretty darn precise.

Despite its massive promise as a cornerstone of our futuristic, smart homes, WiTrack's nowhere near ready for commercial production. It is, after all, still a research project, but the tech's usefulness as an aide for the elderly is all too obvious. Beyond that, the MIT team envisions its 3D tracking system being put to use for video games (think: playing out Call of Duty IRL). What's more, WiTrack's also capable of helping you to control home appliances remotely, much like that Google Glass mod we saw the other day, as the system's able to roughly track individual body parts. So, say you point in the general direction of a lamp, even if it's through a wall, the system can detect that and power the target device on or off. Need some visual proof? Then check out the team's demo video above.

In this article: 3dMotionSensing, 3dmotiontracking, GestureControl, M.I.T., MassachusettsInstituteOfTechnology, mit, research, video, wireless, WiTrack
All products recommended by Engadget are selected by our editorial team, independent of our parent company. Some of our stories include affiliate links. If you buy something through one of these links, we may earn an affiliate commission.