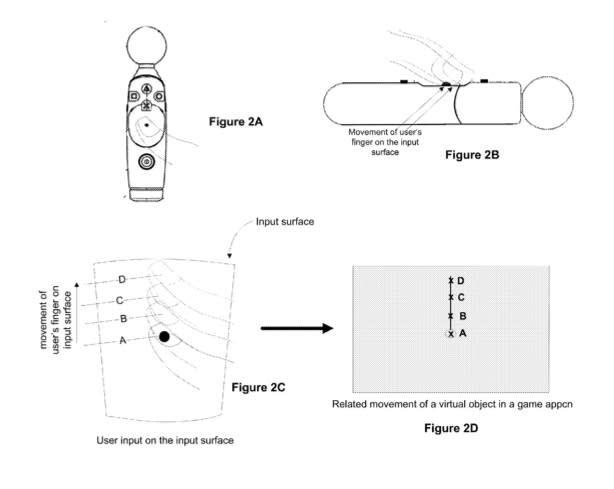 Sony's PlayStation Move controller has helped bring motion-enabled gaming to PlayStation consoles for over three years, but hasn't exactly set the world alight. To better compete with Microsoft's controller-less Kinect and Nintendo's Wii motion accessories, the company has been looking to extract more functionality from its wireless joystick, as evidenced in a recent filing with the US Patent Office. The patent, entitled "Flat Joystick Controller," describes a controller not dissimilar to the PlayStation Move handheld we've come to know and kinda love, but Sony hints that an upgrade could come in the form of a touch-sensitive surface on the front of the handle.

The company says the new controller "enables control for a variety of applications and simulations while providing an intuitive interface," allowing gamers to better control in-game characters and select elements without having to alter their grip. While the patent suggests Sony is only experimenting with the feature, similar to the hybrid DualShock/PlayStation Move controller patent it filed last year, we know that the company mulled an all-touch PS4 controller before settling on the DualShock 4, indicating that touch still has a big part to play in PlayStation's future.

In this article: controller, gamepad, motion, playstation, playstation move, ps3, ps4, sony, touch
All products recommended by Engadget are selected by our editorial team, independent of our parent company. Some of our stories include affiliate links. If you buy something through one of these links, we may earn an affiliate commission.