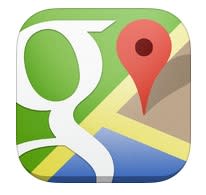 Google has rolled out a minor, yet noteworthy update to its Google Maps app for iOS, which sprinkles a little Google Now functionality into the mix. Now, authenticated users can use Google Maps to check on the status of their flight, hotel and restaurant reservations.

To do so, users simply need to tap on an airport, hotel or restaurant from within Google Maps and they'll be presented with any pertinent information about said location assuming it exists somewhere within the Google universe.

The company has been slowly iterating on making Google's apps feel less like standalone destinations, and more like tools that allow you to access the vast data that Google has about the world, and about you personally. It's been blurring the lines between its services, as well as between what's public and private.

The added functionality, like that arriving in Maps today on iOS, makes Google into a more personalized, smart assistant, even for those who don't have an Android phone running Google Now.

If you don't already have Google Maps on your iOS device, you can download it for free here on iTunes.

In this article: google, google maps
All products recommended by Engadget are selected by our editorial team, independent of our parent company. Some of our stories include affiliate links. If you buy something through one of these links, we may earn an affiliate commission.
Share
Tweet
Share