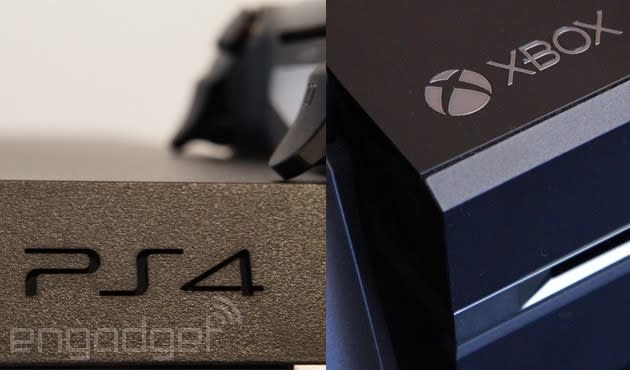 Confirming what we already suspected, sales tracking firm NPD reports that the PlayStation 4 outsold the Xbox One in North America during November. As of latest numbers, the Playstation 4 is in 2.1 million homes compared to the Xbox One's 2 million -- a great start for both consoles and a paltry sales difference. Sony released a statement from SCEA head Jack Tretton, which said, "Demand continues to overwhelm supply, but we're working hard to get PS4 units into the hands of customers throughout the holiday season." The full statement is just beyond the break.

Xbox One, meanwhile, was apparently November's "fastest selling console," with around 101K sold each day of availability (November 22nd through November 30th). Since the PS4 was available starting on November 15th, and the Xbox One went on sale starting November 22nd, the Xbox One caught up in sales so quickly because of higher demand. Or as NPD puts it, "When looking at sales on an average per-week basis, Xbox One led PS4." Last month's Xbox One launch was also Microsoft's most successful console launch on record, which Microsoft's assuredly enjoying.

Finally, we have Nintendo reporting a 340 percent increase in Wii U hardware sales since October. The folks in Kyoto haven't put an official number out there, but NeoGaf forum users have calculated a total based off past numbers. According to the best estimates available, Nintendo moved about 220,000 units last month. It's a low number compared to the industry's newcomers, but at least the 3DS closes the gap a little: between the 3DS, the 3DS XL and the 2DS, the company sold almost 770,000 handhelds in November.

"PlayStation 4 sales in North America and worldwide have been incredibly strong since launch, culminating in PS4 being recognized as the largest console launch in history. In North America alone, more than one million PS4 units were sold in only 24 hours and we're pleased NPD has reported that PS4 was the top selling next gen platform for both hardware and software in November. We are humbled by the passion and excitement demonstrated by gamers for PS4. Demand continues to overwhelm supply, but we're working hard to get PS4 units into the hands of customers throughout the holiday season."

In this article: hdpostcross, jacktretton, microsoft, npd, playstation4, ps4, sales, sony, xboxone
All products recommended by Engadget are selected by our editorial team, independent of our parent company. Some of our stories include affiliate links. If you buy something through one of these links, we may earn an affiliate commission.