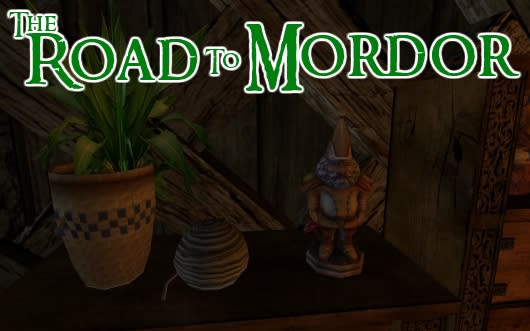 In all of the excitement of Helm's Deep and the changes that it brought, it was pretty easy to forget that we are running out the clock on 2013 and the devs have yet to do anything about housing other than evict a lot of bums and fiddle with the chests. Remember that promise? One of Executive Producer Kate Paiz's four big initiatives for the year? Let me refresh your memory, as Paiz said in January 2013: "I am extremely pleased to say that this year we will be tackling a major revision to the Housing system."

Well, bad news folks: It's not coming this year. I pinged Turbine for a comment about this, and Producer Hannah Foell responded by saying, "After some excellent feedback from the Player's Council we elected to spend more time on it and push the housing update back to next year."

This is disappointing though not surprising. I've had the feeling that Turbine's been "behind" with Lord of the Rings Online this year, especially considering the expansion testing and release, and the studio's been visibly reluctant to get moving on a housing revamp, going so far as to downplay expectations by the community. So if we're not getting any improvements to housing in 2013, then I have time to ponder what this system needs. And since I'm not on this super-secretive and super-mysterious player council, you can hear what my thoughts are right now. Listen, I'd love to see freeform object placement for housing in this game, I really would, but I'm also realistic. It's just not going to happen within the current game engine without a lot of time and resources that Turbine probably can't afford to spend.

And if we're wedded to the hook system, let's improve it. Add a ton more hooks to each house and make them closer together so we're not forced to furnish the house with abnormally spaced furniture. And let's make many of the hooks more flexible; thin furniture and small furniture should share slots, and we definitely need to see more special furniture spots in houses.

Idea #2: Rating each others' houses

If you like homes as a way to uniquely decorate, then chances are you want to show it off. RIFT's housing has a great system that encourages people to visit homes and give them a thumbs-up rating if they're something special. This would be terrific in LotRO, I say.

Seriously, the Rohan houses make me green with envy every time I go into one, all the more so because NPCs can have one while I'm stuck with a plain-Jane Bree-land-style abode. There's been so much work done to make these Rohan homes look incredible, so why not allow us to move into an Edoras neighborhood and settle down there?

I've never been sold on the neighborhood concept because it's (in my experience) never been utilized correctly. People don't just hang out in neighborhoods for the heck of it, and there's little reason to wander around unless your kin is throwing a party. So for those of us who don't care to have a front yard, why not just offer an apartment instance inside each major city? That would encourage more of the population returning to these cities and cut out the annoying neighborhood middleman. Idea #5: Look at what the competition is doing and "borrow" it

Both WildStar and World of Warcraft have some pretty awesome ideas in regards to housing next year, and the trend I'm seeing is to make housing interactive, social, and functional. Building up housing, sending NPCs out on quests, collecting pocket dungeons, and utilizing crafting stations all make going home and spending time there appealing, especially if there's something fun to do for a friend who tags along. LotRO would do well to liberally borrow from these ideas.

Idea #6: Give us the option to own multiple houses on the same server

Maybe you like having a shared home between your characters on a server, and that's fine. But I strongly feel that Turbine needs to get slightly more modern and let individual characters own separate houses as well. The RP crowd would want a racial abode to match their characters but are currently forced to stick to one racial type. For me, I want each home to reflect my character's journey and acquisitions. Getting housing goods on an alt is so very "meh" because I either have it already or don't have room to put the new stuff anywhere.

Since Turbine has no problem putting in mannequins to show off outfit ensembles (for sale!) all over the game, why not give us a few naked mannequins that we could equip with some of our favorite outfits and then display them in our home? I'd treasure that decoration more than most of the others, I can tell you.

Beyond Rohan housing and apartments, I'll toss this into the ring for consideration: non-traditional houses. What about a boat? Or a cave? Perhaps you clean out an enemy lair and you get to claim it as your own? Or perhaps for those among us who like the simple life, a small tent in the middle of the woods?

As I'm extremely wary of the whole player council situation -- high levels of developer influence plus no real community transparency as to what advice is being given is never a good idea -- I will say that I really hope Turbine's listening to the larger LotRO community on housing revamp ideas. There's a great thread on the forums that's just filled with practical, thoughtful ideas, many of which would go a long way to taking this creaky old system and making it something we could be proud of using.

The way I've always seen it, Lord of the Rings Online is a well-realized world with a strong IP and a community that has deep roots. It's absolutely the ideal game for a robust housing system, and it's really embarrassing that what it has is trounced by games from 2004, nevermind what's coming out next year. My vote would be to scrap the current system and start over, but barring that, the team needs to stop procrastinating on this promised upgrade and put in as many useful and reasonable changes as possible with the resources at hand.

And I don't want to give the impression that it's all bad; there's a lot to be praised with the housing here, including the fact that it exists, period. Turbine's done a good job continually adding new housing items over the years, and I'm still tickled by the ability to set a house's music and wallpaper. It's even functionally useful for a mailbox and an additional port, and I've seen kinships use kin housing to great effect for the benefit of all.

So here's to the new year and a new hope of a good revamp. Let's not put this on the backburner again, OK?

When not enjoying second breakfast and a pint of ale, Justin "Syp" Olivetti jaws about hobbits in his Lord of the Rings Online column, The Road to Mordor. You can contact him via email at justin@massively.com or through his gaming blog, Bio Break.
In this article: f2p, fantasy, featured, free-to-play, Hannah-Foell, helms-deep, housing, kate-paiz, lord-of-the-rings, lord-of-the-rings-online, lotro, opinion, player-housing, rift, road-to-mordor, the-road-to-mordor, turbine, turbine-entertainment, wildstar, world-of-warcraft
All products recommended by Engadget are selected by our editorial team, independent of our parent company. Some of our stories include affiliate links. If you buy something through one of these links, we may earn an affiliate commission.