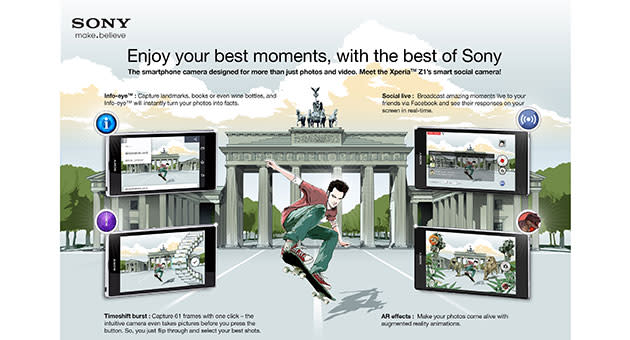 Sony's just announced an upgrade to Android 4.3 (Jelly Bean) for the Xperia Z1 and Xperia Z Ultra, and it's tacking on some of its own enhancements along with the standard performance tweaks. The super-sized Xperia Z Ultra, for one, will now include the Smart Social Camera suite for sharing media across social networks, utilizing image-recognition technology and adding AR effects, among other things. For Z Ultra users who've been envying the Z1's photo-focused feature set, this should be a welcome addition -- though, of course, a software update can't magically upgrade that 8-megapixel shooter to a 20.7MP cam.

The update also adds improved versions of Sony's native apps, including Messaging, MyXperia and Smart Connect, along with the company's media apps such as Walkman. The rollout has just begun, so keep an eye out; according to Sony, other Xperia devices should be getting the bump to 4.3 soon.

In this article: mobilepostcross, sony, Sony Xperia Z Ultra, Sony Xperia Z1
All products recommended by Engadget are selected by our editorial team, independent of our parent company. Some of our stories include affiliate links. If you buy something through one of these links, we may earn an affiliate commission.