Anchor makes it easier to invite guests to your podcasts

What we're listening to: 'Hunting Warhead' and Grimes 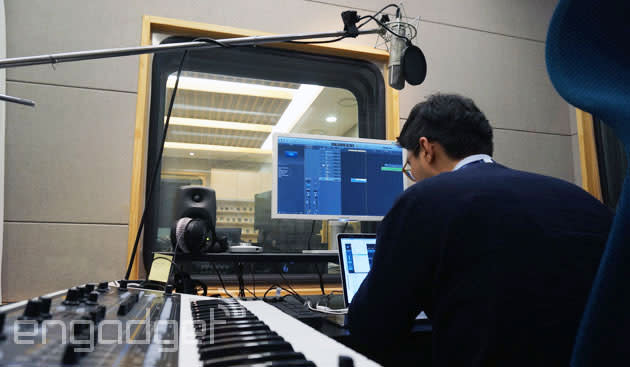 A car barrels across a highway, accompanied by a gently stirring orchestral movement. Wait, it speeds away in silence. Actually, it's careering along to a rapid drumbeat and a brutal string arrangement, suggesting there's trouble ahead. That's how Samsung's Joong-Sam Yun prefaced our meeting at the company's Sound Lab in Korea, overlapping different backing tracks to a TV show opening and highlighting the drastic effects of audio. His team is trying to bring a similar aural clout to the company's devices.

Samsung's Galaxy S series has become known as the iPhone rival, no doubt magnified by the ongoing legal tussles between Samsung and Apple, and its own ads for the Galaxy S III. Becoming arguably the most visible (and successful) Android smartphone maker has made it a magnet for criticism, fair or otherwise. Despite multiple critically and commercially well-received smartphones, dominating the TV market and spending $10.8 billion a year on R&D, it seems the Korean company hasn't quite achieved the identity it wants. Now, with an eye on changing consumer perception, the company has turned to sound design to make Samsung distinctly recognizable to your ears.

Aside from shifting to studio recording and increasingly sophisticated methods aimed at making its ringtones and start-up melodies unique, Samsung's Sound Lab is also tasked with testing and creating new uses for haptic technology -- another effort that the company hopes will ensure its future mobile products maintain that smartphone market share. The department has existed for decades, but its output was previously dedicated to more by-the-book digital audio work, pulling from a huge catalog of generic Foley sounds (everyday sounds, reproduced in a studio) when needed. However, two years ago, when it came to developing the audio for the Galaxy S III, the Sound Lab needed to deliver a more natural, less "cold" sound to go alongside new hardware "inspired by nature." It had to deliver something different that would make its new smartphone undeniably Samsung-made.

Early feedback said that recordings "sounded like they came from the toilet."

Foley recording techniques suddenly came back to the fore, because the sound bank Samsung used wasn't unique. So, the engineers and designers at the lab got out the glassware, some mics and varying quantities of liquid in an effort to make their very own nature-inspired sound library. The splash notification sound you heard on the Galaxy S III isn't actually water. It's not milk or yogurt either (though these were both tested); but orange juice. Samsung's explained this before, but the sound team admitted that the eventual sounds took some revising: Early feedback suggested that recordings "sounded like they came from the toilet."

"We fell into a panic," Yun admits.

The team returned to the studio and tweaked both the Foley recording and how it sounded on the device. The resulting natural soundtrack that peppered the Galaxy S III might still have a slight ring of domestic plumbing, but it remained a statement of intent as the company offered more resources to its sound design arm.

"[The company] wanted to add emotional value; that was why they hired sound designers," Yun said. "Recording sounds via orchestra? Ten years ago, this would have been impossible, but we can [now] present a high-quality ... emotional sound." The practice of sonic branding (as it's referred to at its most insipid level) is familiar territory for other Top 10 Global Brands, where the likes of McDonald's and Microsoft have their own unmistakable audio identity. Samsung wants the same and the de facto ringtone melody on Galaxy phones reappears on other devices, is repurposed for backing music in its own retail stores and is even put to work at the company's big press launches.

We're not sold on the notion that a lone notification or ringtone can ever bring a tear to our eyes, but it's hard to argue with the fact that Samsung's seven-note ear worm and those nature-inspired notifications are creeping into the public consciousness -- a watery swipe-to-unlock at Starbucks, a splash sound in the middle of a crowded train. It helps that the rest of the built-in ringtones are simply higher quality than what's come before.

Under Yun's supervision, Samsung's signature melody, "Over The Horizon," (embedded above) has made its way into most of the company's smartphones since the Galaxy S. Yun previously penned music arrangements for commercial films and brought that experience with him to Samsung. The team now makes its compositions with real musicians, rather than using digital sounds, as it did in years past. It doesn't matter how rich or lilting a composition sounds on a digital piano; transform those into a live performance and you immediately elevate whatever sentiment or emotional reaction that was being aimed for.

The team reaffirms that its new identity is focused on consistency across Samsung Electronics' myriad products -- a sound that says, "This is a Samsung product." It's something the company reckons will only increase in importance as it continues to expand and push smart appliances and home systems.

There's huge potential in haptic tech, although anything groundbreaking might be a ways off.

But making products "sound" Samsung (in a traditional sense of the word) is only a portion of the lab's goal. It's also heavily involved with the development of "non-visual sound," like haptic and vibrational technology. Along those lines, it's currently readying an entire UX aimed at users with disabilities in addition to rolling out further haptic features and enhancements on its smart devices. The efforts here mark another attempt to separate Samsung's consumer tech from its rivals, to offer something that users won't get elsewhere. However, the Sound Lab will have to push deeper than what we've seen so far. Samsung's Galaxy Note 3 offers unique vibrational feedback to the stylus for different (digital) pens, which is meant to bring the writing experience closer to paper, but it's hardly a killer feature. Development is treading carefully, and we're told that any expansion will require "in-depth study" with regard to the strength and frequency of haptic notifications. The haptics found in the Galaxy Gear prove a good example. Because the wearable attaches directly to your wrist, it meant halving both the ringing volume and haptic feedback for the company's first smartwatch. According to its research, the average distance between the wrist and the ear is 50cm, while your smartphone (in your pocket or on the desk) is about a meter away.

There's huge potential in haptic tech, although anything groundbreaking might be a ways off. "Our homework is to work out to what extent haptic notifications and feedback can be improved. As hardware evolves ... haptics will too," Yun explains. If Samsung gets it right, it might not be all that disparate from what it's trying to achieve with its ever-adapting anthem: something that could define the company and its future.

In this article: audio, mobilepostcross, musicdesign, OverTheHorizon, ringtone, samsung, samsungsoundlab, soundlab
All products recommended by Engadget are selected by our editorial team, independent of our parent company. Some of our stories include affiliate links. If you buy something through one of these links, we may earn an affiliate commission.