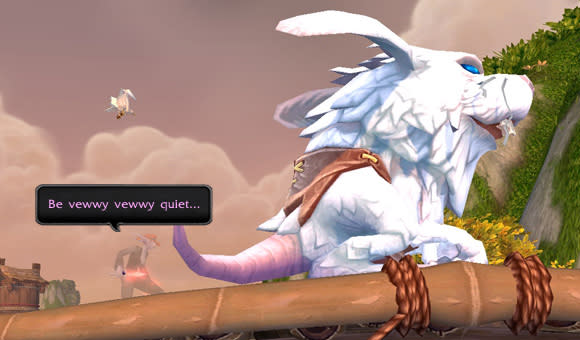 Point is, we've had a couple of conversations now about the aspects of roguedom we're least pleased with, and would thus like to see change somehow in the upcoming expansion. Three of the key themes I've seen recurring in the discussion are:Over the next few weeks, we'll talk about each of these issues in greater depth. This week, I'm all, "Hey guys, what's up with stealth? Eh? Mmm?"

Let's face it: Stealth, when we are out and about in the world, is freaking awesome. It is the single most powerful ability in our arsenal. It allows us to complete quests like "go kill Commander Hardtoreach at the bottom of Thousand-Mob Cave" in a fraction of the time it takes other classes -- even feral druids, who move much more slowly than us when sneaking around. It allows us to explore nooks and crannies of the game more quickly, and at lower experience levels, than players of any other class. It allows us to solo challenging content, like old raids, without having to slog our way through trash killing All of the Things.

And world PvP? C'mon: Is there any feeling more satisfying than when you creep up behind a player of the enemy faction, wait for an opportune moment when they are preoccupied or weakened (hey, let's be real: we're rogues), catch them completely off guard, and then dispatch them with ruthless efficiency?

Yes, I know stealth doesn't always work perfectly. And yes, I know that in PvP a skilled player can still beat a rogue who gets off an opener on them from stealth. But that doesn't change what, for me, remains a fundamental truth: When I'm playing alone, stealth is utterly game-changing and tremendously enjoyable. The Bad: When We're in a Group, We're Just Dude(tte)s With Blades

Unfortunately, the more people who come to our party, the bigger the wet blanket on our stealth becomes. When we're part of a group mashing its way through quests or dungeons, our ability to stealth our way past mobs becomes all but irrelevant: Sadly, the inferior classes aren't able to follow suit (aside from the occasional, fleeting Shroud of Concealment), and we can't leave them behind, pirate code be damned. (It's really more a guideline, anyway.)

In group PvP -- be it battlegrounds, arena or open-world warfare -- stealth can still be fun, and it can even turn the tide of battle. But its use becomes far more strategic and isolated, and obstacles like enemy area-of-effect spells, Shadow Sight orbs (in arena) and the in-combat timer (which prevents us from entering stealth unless we haven't attacked or been attacked for six seconds) tend to mean that we don't actually get to use stealth all that often.

Well, except for Vanish, of course. In one of my least favorite quirks of rogue gameplay, a raiding rogue has the ability -- roughly twice every five minutes (thanks to Preparation) -- to re-enter stealth for one second just so s/he can re-open on the boss for a tiny DPS gain (thanks to our level-15 talents). There are occasions where Vanish can be used more compellingly -- to get off an extra stun on an add with Cheap Shot, for instance, or to fulfill a raiding rogue's one true purpose: To be the last man standing after a wipe.

But these benefits to stealth are few, small and far between. The unfortunate fact is, for many players in many areas of the game, stealth -- perhaps the primary defining ability of the rogue -- is, ironically, almost nowhere to be seen.

How Do We Make Stealth Useful Again? I think I understand how we got here: As we talked about above, stealth is a tremendously powerful ability, and it's difficult to balance around. For instance, the way PvP has evolved up to this point, whenever stealth is a little too easy to use or has one too many benefits attached to it, rogues suddenly become part of an unstoppable killing machine. That's fun for us, not so fun for the other 90%+ of the playerbase.

Meanwhile, in group PvE, giving stealth too many special perks runs the risk of making leaders feel they need to bring a rogue to every occasion -- which, though that'd be pretty swell for us, wouldn't be so swell for all of the not-us players out there who get left out in the cold because a rogue is more useful. And the direction of the game over the past few years has decidedly (and wisely, for a game so large) moved toward one that offers equal opportunity to all players, regardless of the class they choose to play.

As a result, stealth needs to be balanced on the head of a pin: It needs to be fun, which means it needs to be awesome, but it can't be too awesome in group play, because then it makes all the other classes feel bland and colorless. The result has been that stealth itself (and, arguably, the rogue class) loses its edge to allow the game as a whole to succeed.

So. Talk to me, people. Where does this leave us? In the context of realistic change, what do you wish would happen to make stealth a more interesting, engaging and frequently used ability outside of questing and solo play? How can that happen without making rogues too powerful (which would have to mean sacrifices in other areas, such as the amount of damage we deal or the number of crowd-control tools in our belt) or too special-snowflake-y?

Think of your average PvE dungeon or raid boss fight, for instance. Most rogues use stealth exactly once per fight: at the beginning. As I mentioned earlier, more experienced rogues weave in a Vanish every couple of minutes for a negligible DPS boost. What would you want to see change there?

My first thought is probably the least creative option: Give all rogue specs get a cooldown like Shadow Dance (arguably one of the most engaging DPS cooldowns in WoW), allowing us to briefly use our stealth abilities with enhanced damage. But surely there are more interesting possibilities out there.

Should Vanish become a defense-only ability with multiple "charges" -- say, 8 uses per 5 minutes in PvE, 2 per 5 minutes in PvP -- and make us immune to area-of-effect damage as long as we remain stealthed? Should stealth itself have a limited number of charges, each one only lasting a few seconds each time you push the button, but give significant benefits in addition to near-invisibility when it's active, such as enhanced damage and defensive abilities? Should a rogue be permanently in a state of quasi-stealth, wreathed in a swirling, shadowy aura and able to jump like a saurok?

What do you want to see? And what would you be willing to trade off in order to see it? How important to you is stealth when you play a rogue?

Sneak in every Wednesday or two for an early glance at rogues in the upcoming expansion, a look at the eight key things you should keep in mind when leveling your rogue -- and of course, the answer to why we'll always be the bad guys.
In this article: featured, rogue-changes, rogue-info, rogue-questions, rogue-stealth, rogue-talents, wow-rogue, wow-rogue-info, wow-rogues
All products recommended by Engadget are selected by our editorial team, independent of our parent company. Some of our stories include affiliate links. If you buy something through one of these links, we may earn an affiliate commission.