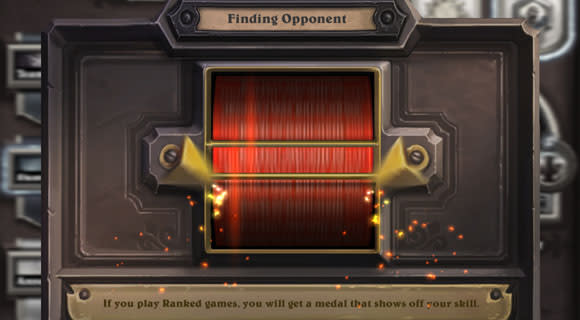 Hearthstone Community Manager Keganbe chimed in to remind everyone that the first Ranked Play season will be ending soon. After the season ends, everyone's rank will be reset to 25 and the climb to the top will begin anew. We saw the fall (or at least, rebalancing) of mages in the inaugural season of Hearthstone. Test Season 2 will begin on January 2nd. We'll start seeing alternate card backs and golden heroes soon!

Thank you for helping us test our very first Ranked Play season! This season is intended to conclude on January 2nd, so be sure to wrap up your climb up the ladder before that date. Once the season is over, everyone's ranking will be reset back to Rank 25, and Test Season 2 will begin!

During the course of this first test season we've gotten some very valuable feedback and data from you regarding the new Ranked Play system. We greatly appreciate your efforts in helping us test this updated Play mode, and we look forward to seeing your future feedback in Test Season 2. In the future, once the Test Seasons have concluded, we look forward to adding our Ranked Play rewards: Alternate card backs and Golden Heroes. We can't move on without your help!

Be sure to continue reporting bugs on our Bug Report forum here, and give us your feedback on Ranked Play mode on our general discussion forum here.

Thank you for helping us test Ranked Play mode!

source
The highest rank I've been able to reach so far is rank 8. How have your experiences in Hearthstone been? Which decks have you been using to climb the ranks? Personally, one month per season is too short. I think each season should be expanded to at least 2-3 months at most. I feel as though it takes quite a bit of time for constructed (play mode) players to get to their appropriate ranking.
In this article: hearthstone, play-mode, ranked, season-1
All products recommended by Engadget are selected by our editorial team, independent of our parent company. Some of our stories include affiliate links. If you buy something through one of these links, we may earn an affiliate commission.