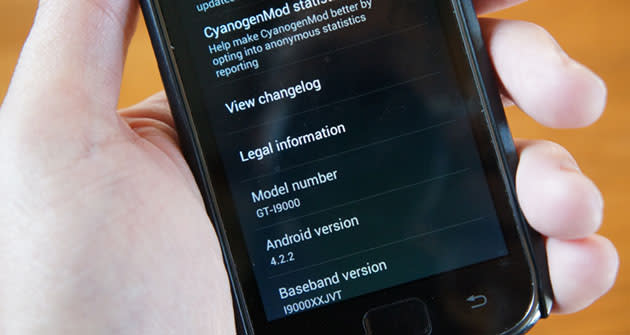 Though CyanogenMod has gotten plenty of ink lately for its Oppo N1 hookup and Google Play approval (and subsequent removal), it's still first and foremost a modding outfit. In fact it just crossed 10 million downloads of its custom Android ROMs, according to its latest stats. That marks a lot of folks wanting to re-skin their handsets, or give others like Samsung's Galaxy S (shown above) new life. That model, along with the Galaxy S II and S III were the most popular devices to mod, a reflection of their popularity and perhaps users' disdain for TouchWiz. It helps that you can now skip difficult command-line installs, thanks to OTA updates and new desktop and mobile apps. Now if you'll excuse us, we're going to install CyanogenMod's Android 4.2.2 ROM on our Galaxy S -- a device officially unsupported since the Gingerbread era.

In this article: 10million, cyanogenmod, milestone, mobilepostcross, modding, mods, smartphones, tablets
All products recommended by Engadget are selected by our editorial team, independent of our parent company. Some of our stories include affiliate links. If you buy something through one of these links, we may earn an affiliate commission.