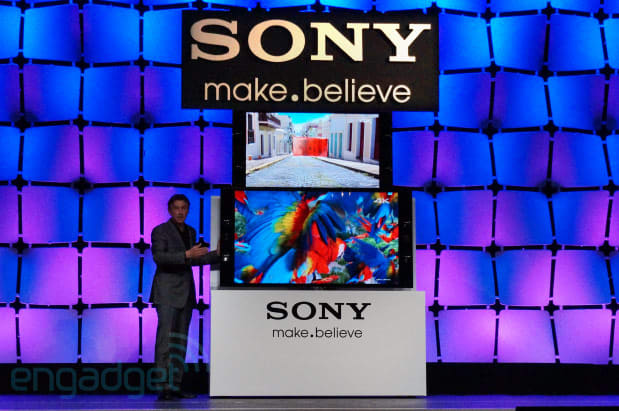 Think $25,000 for an 84-inch 4K TV is a bit tough to swallow? You're certainly not alone, but if you're willing to compromise on a few viewable inches, you could very well save yourself quite a bit of cash. At Sony's NAB press conference today here in Las Vegas, the company finally shared pricing for its smaller 4K models, the Bravia XBR-55X900A and the XBR-65X900A, which ring in at 55 and 65 inches, respectively. That first flavor will retail for a mere $5,000, with its larger sibling due in stores for just two grand more. As we learned at CES, both models offer Triluminous displays with X-Reality PRO and Motionflow XR960 technology, WiFi and NFC one-touch screen mirroring, not to mention native support for displaying 3,840 x 2,160 pixels images. The more budget-friendly duo will hit stores on April 21st -- they'll also be available to order online in just two weeks' time.

"These new models will be arriving in homes just before the summer and are sure to bring the enhanced viewing experience of 4K TV to a whole new audience," said Mike Lucas, senior vice president, Sony Electronics Home Division. "Our TVs deliver a vibrant and natural picture that is four-times clearer than high definition. As for content, these new sets enhance all of the video people are watching today, and this summer our 4K media player, followed in fall by the video distribution service will demonstrate how Sony continues to lead in bringing the 4K entertainment experience to viewers."

This summer, consumers of Sony's 4K UHD TVs can purchase the FMP-X1 4K Media Player bundled with 10 feature films and video shorts in true 4K resolution for $699. In the fall of 2013, users of the same 4K Media Player will be given access to a fee-based video distribution service offering a library of 4K titles from Sony Pictures Entertainment and other notable production houses. The feature films included with purchase of the 4K Media Player are Bad Teacher, Battle: Los Angeles, The Bridge on the River Kwai, The Karate Kid (2010), Salt, Taxi Driver, That's My Boy, The Amazing Spider-Man, The Other Guys and Total Recall (2012).

With a variety of options already available for the home theater, only Sony can bring true 4K content to consumers. Last November, in another first, Sony gave native 4K movies and video to consumers who purchased the XBR-84X900, Sony's first and biggest 4K Ultra HD TV. Making good on its promise to periodically update and add content to the system, Sony recently began delivering new 4K content to 84-inch XBR owners with the home server. Along with a slew of new 4K video shorts, the classic film Lawrence of Arabia has been added to their libraries, which was recently remastered in 4K resolution by Sony Pictures Colorworks. Owners of the first generation video server will be able to exchange that device for the FMP-X1 4K Media Player, once the distribution service launches in the fall.

To coincide with the availability of Sony's new 4K Ultra HD TVs, Sony Pictures Home Entertainment is also bringing to market a lineup of "Mastered in 4K" Blu-ray™ Discs. With 1080p high definition picture that's derived from the highest quality 4K source materials with new expanded color, consumers will enjoy a dynamic and vibrant picture that's both optimized for the 4K Ultra HD TVs and plays back on all existing Blu-ray™ players and HDTVs. As an added bonus, consumers who purchase the XBR-55X900A or XBR-65X900A 4K Ultra HD TV will also receive Spider-Man (2002), Ghostbusters and Angels & Demons "Mastered in 4K" Blu-ray Discs (while supplies last).

Images become lifelike with a resolution of four-times that of Full HD TV (3840 x 2160) delivers lifelike images
All content is viewed at the highest resolution possible with enhanced images reaching near 4K with Sony's proprietary two-chip 4K X-Reality PRO picture engine
All colors, including difficult blues, greens and reds, are delivered naturally and accurately through TRILUMINOS™ Display
An immersive picture draws in viewers with blacker blacks and excellent contrast produced with dynamic edge-lit, LED backlighting
Amazing sound from the integrated 65 Watt, front-facing, magnetic fluid speaker system complements the stunning picture
A cinematic experience is brought to life through Full HD 3D and passive glasses
Entertainment choices are endless with WiFi™ connectivity, including access to the full Sony Entertainment Network suite of services
Pre-orders for 4K UHD TVs begin April 21, 2013 at Sony Stores and select retailers nationwide. The 4K Media Player will be available this summer.

Beginning April 17, Sony will kick off a year-long partnership with The Tribeca Film Festival to promote 4K video production and distribution among amateur and professional film makers. During the festival in New York, Sony will showcase 4K technologies for use from lens to living room.

In this article: 4k, 4ktv, 55X900A, 65X900A, bravia, hdpostcross, hdtv, nab2013, sony
All products recommended by Engadget are selected by our editorial team, independent of our parent company. Some of our stories include affiliate links. If you buy something through one of these links, we may earn an affiliate commission.