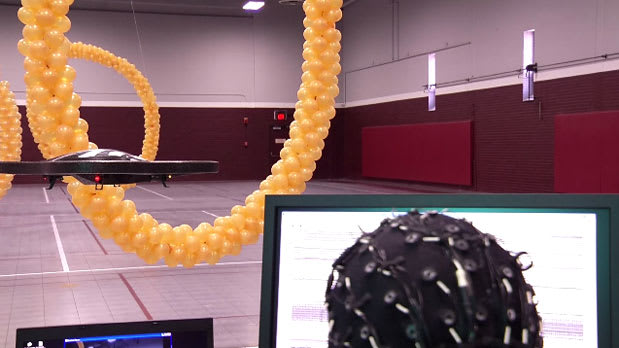 Researchers from the University of Minnesota seem hellbent on turning us all into X-Men. Why's that, you ask? Well, back in 2011, the team devised a method, using non-invasive electroencephalogram (EEG), to allow test subjects to steer computer generated aircraft. Fast forward to today and that very same team has managed to translate their virtual work into real-world mind control over a quadrocopter. Using the same brain-computer interface technique, the team was able to successfully demonstrate full 3D control over an AR.Drone 1.0, using a video feed from its front-facing camera as a guide.

But it's not quite as simple as it sounds. Before mind-handling the drone, subjects underwent a training period that lasted about three months on average and utilized a bevy of virtual simulators to let them get acquainted with the nuances of mental navigation. If you're wondering just how exactly these human guinea pigs were able to fly a drone using thought alone, just imagine clenching your fists. That particular mental image was responsible for upward acceleration. Now imagine your left hand clenched alone... that'd cause it to move to the left; the same goes for using only the right. Get it? Good. Now, while we wait for this U. of Minnesota team to perfect its project (and make it more commercial), perhaps this faux-telekinetic toy can occupy your fancy.

Via: SlashGear
Source: Journal of Neural Engineering
In this article: ArDrone, BCI, BrainComputerInterface, drone, EEG, mindcontrol, quadrocopter, UniversityOfMinnesota
All products recommended by Engadget are selected by our editorial team, independent of our parent company. Some of our stories include affiliate links. If you buy something through one of these links, we may earn an affiliate commission.
Share
Tweet
Share