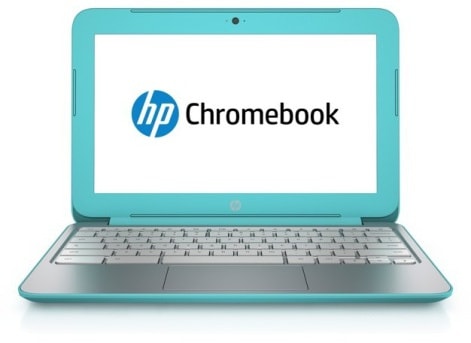 We've seen Chromebook prices get cheaper and cheaper, but the majority opinion appears to remain the same: they're nice laptops in theory, but they don't cut it in the real world. Interesting, then, that Google's marketing the new HP Chromebook 11 as the laptop "for everyone." One thing that we think almost everyone can agree on: $279 for a well-designed, 11.6-inch notebook with a bright IPS display is a none-too-shabby deal. But, given the limitations of Chrome OS, is this actually a worthwhile purchase? HP's latest offering is one of the best Chromebooks we've seen, combining a great design, a comfortable keyboard and reliable performance for $279.

Be the first to review the Chromebook 11?
Your ratings help us make the buyer’s guide better for everyone.
Write a review

The Chromebook 11 may only cost $279, but its design is still impressive. The glossy plastic lid and back are uninterrupted by screws, vents or any other components, lending the machine a modern, classy air. Of course, as soon as your greasy fingers hit the plastic, things look a little less pristine. There are no moving parts here, and the smooth design reflects that -- compare this guy to Samsung's Chromebook from late last year, and you'll get the picture. It's hard not to see hints of the old plastic MacBook of the mid-aughts here; the rounded edges and reflective finish aren't exactly revolutionary design choices, after all. Google leaves its own mark on this device, though: both the rim around the island-style keyboard and two rubber strips on the backside are done up in one of four accent colors (your choice of blue, green, red or yellow).

Even knowing that the Chromebook 11 is super light (2.3 pounds, or 1.04kg, to be exact), I was still surprised at how insubstantial it felt in my hands. As someone who squeezes a 13-inch Ultrabook into a work bag every day, I definitely appreciate this laptop's portable size. Thinness isn't the selling point with this machine, but at 11.69 x 7.56 x 0.69 inches (297 x 192 x 12.6mm), it's definitely not bulky. There's a magnesium frame on board, which goes a long way in helping the machine feel sturdy despite the featherweight profile. That's not to say you're getting the same build quality as a $1,000 Ultrabook; the plastic lid occasionally creaks under pressure.

With the lid closed, the only distinguishing mark on this Chromebook is a strip sporting Chrome's four signature colors that lights up when the machine is in use. On the reverse side, you'll find two colorful rubber strips (in our case, red) along with Google and HP branding. Beyond that, the notebook is remarkably bare, with the left edge housing all the ports and connections. These include a combination headphone / mic jack, two USB 2.0 ports and a micro-USB connection with support for SlimPort video out. Incidentally, you'll be charging this device via micro-USB, which is extremely convenient if you're already carrying around a cable for your Android tablet or phone. (One comes in the box, in case you've managed to go through life without building a collection.) The downside is that charging up takes a long time; try about four hours. There's no SD card slot, but with just 16GB of on-board storage, you'll be relying more on Google Drive than local storage anyway.

Raise the lid, and you'll be face to face with the machine's 11.6-inch display, which is framed by a wide bezel sporting Chrome branding. The chiclet keyboard takes up almost two-thirds of the palm rest, with a clickpad sitting just below it. And that's it from a physical standpoint; the design is simple, but in a satisfying, less-is-more way.

As an under-the-radar note: Google is releasing its first accessory designed in-house to go with the Chromebook 11. Don't expect anything elaborate, though: it's just a simple, if well-made, case available in black, blue / grey or red / grey. Sold separately, it will set you back $50. (Ouch.) Whether you choose to spring for this sleeve or not, it's a good idea to invest in some sort of protection, especially since the notebook will likely be on the road with you quite a bit.

I'll never quite get used to not having a dedicated caps lock button, but that useless whining aside, this keyboard is quite decent. (If you really can't get past that omission, you can configure the search key to control caps lock in the settings menu.) I didn't notice much flex to the deck when typing, and the chiclets feel springy and responsive. The keys are well-spaced enough that accidentally hitting an adjacent letter shouldn't be an issue.

The trackpad, meanwhile, isn't so solid. It feels a bit sticky, which in practice meant I had to tap and right-click more than once for the system to register my input. At least two-finger scrolling works reliably; with the browser-based Chrome OS, you'll be needing that gesture a lot.

While it's nowhere near as high-res as the Chromebook Pixel, the HP Chromebook 11 at least sports an IPS panel that offers 300 nits of brightness. The 11.6-inch, 1,366 x 768 screen delivers accurate colors, but the glossy finish can prove distracting if you're sitting under heavy lighting. Preferably, HP would have gone for a more anti-reflective panel, but the viewing angles here are still very generous.

The Chromebook 11 pumps out decent sound, though don't expect party-worthy volume. Maxed out, the speakers are only loud enough to fill a small room. With the digitally tuned speakers sitting directly under the keyboard, though, sound won't be obstructed or distorted -- it's a clever design choice.

The fun thing about testing a Chromebook is that you have a free pass to surf the web to your heart's content. In the absence of many benchmarks to run, the real measure of such a device's performance is how it handles the web and web-related apps. To that end, I opened two dozen or so browser tabs, edited documents in Google Drive, tried out the very unflattering VGA webcam and watched some HD clips on YouTube. The Chromebook did trip up and require a restart once, but overall it handled apps, browsing and video streaming well.

With an ARM-based Exynos 5250 SoC and 2GB of RAM, this machine makes no pretense of being a powerhouse. At the HP Chromebook 11 announcement event, Google reps emphasized that this machine is fanless, so don't even think about whipping this laptop into an overclocked frenzy. For more modest use, though, this guy is fine. In SunSpider, it notched a score of 768ms, which isn't stellar but falls in line with other Exynos-powered Chromebooks.

Google and HP rate the Chromebook 11's 30Wh battery for up to six hours of use on a charge. With a dozen-plus tabs open in the browser, occasional video playing and answering emails, the laptop endured for about four hours. That time, it's worth noting, reflects using the device with the display brightness maxed out, so you may see a longer runtime if your environs allow for a dimmer setting. On our battery rundown test, which involves playing a locally stored video on loop with brightness set to 65 percent and WiFi on, the Chromebook lasted for five hours and eight minutes. That's almost an hour and a half short of the Samsung Chromebook's runtime when we tested it in late 2012, and it's certainly less longevity than you'd get with a tablet.

Engadget's WiFi-equipped review model is indeed the only currently available configuration, though a version with 4G is reportedly on the way. Interestingly, though, the Chromebook 11 is the second one from HP late this year; just a month ago, the Chromebook 14 was unveiled, though that won't go on sale until the holiday season. Comparing this Chromebook 11 to the Haswell-powered 14-incher and some older devices in Google's lineup, it's clear that the new 11-incher's advantages are portability and a refined design. The Chromebook 14 and the Samsung Chromebook are both rated for longer battery life, but they are heavier and -- in the 14's case -- more expensive. Physically, this device is superior to older models, but it won't offer a performance jump.

Even if Chromebooks are new to you, chances are you've gleaned that its operating system, Chrome OS, is based on Google's eponymous browser. All the company's apps are baked in as well, including Drive, YouTube, Gmail, Docs, Calendar and so on. When you first boot up, you're greeted with a "getting started" box. Here, you can learn more about apps, working offline, editing photos, managing files and more. There haven't been very many substantial additions to the software since we last reviewed a Chromebook, though native apps were released in September and Netflix support has since been added. (That was our biggest concern with the Samsung Chromebook.)

You'll also be treated to several freebies: a free 100GB of storage on Google Drive for two years, a 60-day trial of Google Play Music All Access and 12 free sessions of Gogo in-flight internet. Personally, I was most jazzed about the Gogo passes, but getting a taste of Google's more premium services isn't bad, either.

Writing the pros and cons for a Chromebook review is a tricky task. Aside from the flaky touchpad, the biggest disadvantages -- only 16GB of SSD storage, an operating system largely limited to Google's own ecosystem -- are part of what makes a Chromebook a Chromebook. And while Google will tell you that this machine is "for everyone," it's clearly not. Need a long-lasting notebook for cranking out reports and papers? A media and gaming machine to see you through NVIDIA GeForce-worthy titles? Look elsewhere, as you probably already have. It's not a stretch, though, to say such a device is great for some casual users who need a smooth-running machine for surfing the web, responding to email and watching Netflix.

If you can move past the inherent limitations of a Chromebook, you have a great value on your hands. A well-built laptop with a bright IPS display and a decent keyboard for $279 is certainly worthy of a place on your comparison-shopping list. If your pockets are well-lined enough, you could even treat this guy as a devoted "on-the-road device" -- it certainly beats a tablet-and-keyboard-case combo for convenience and performance. And Chromebooks' applications for classrooms have also been rehashed in our previous reviews. It's up to you to determine what your needs are, but if you know what you're getting, you'll enjoy the HP Chromebook 11.

In this article: chrome os, chromebook, ChromeOs, google, hp, hp chromebook 11, HpChromebook11, review
All products recommended by Engadget are selected by our editorial team, independent of our parent company. Some of our stories include affiliate links. If you buy something through one of these links, we may earn an affiliate commission.