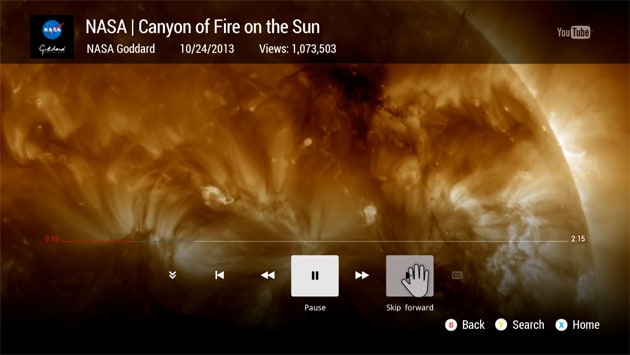 Microsoft thinks of the Xbox One as a complete media center, but many would say it's unfinished without a way to catch up on YouTube videos. Thankfully, one is coming just in the nick of time -- the company has revealed that a native YouTube client will be available when the system arrives on November 22nd -- something that's not available on the PS4 (yet), although owners of that system can watch videos in the web browser. The officially sanctioned player will support channel subscriptions as well as Kinect-based gesture and voice commands. Additional features like Snap mode support are coming in the future, Microsoft says. The app launch doesn't mean that Google and Microsoft have resolved all their differences over YouTube, but it will let you stream cat clips and blooper reels from the comfort of your living room.

Update: We've checked the app on our Xbox One test unit, and there's an additional treat in store for mobile viewers: you can use YouTube's Android and iOS apps to send videos to the console.

Via: Major Nelson (Twitter)
Source: Xbox Wire, YouTube Blog
In this article: console, gaming, google, hdpostcross, internet, microsoft, streaming, VideoGames, xboxone, youtube
All products recommended by Engadget are selected by our editorial team, independent of our parent company. Some of our stories include affiliate links. If you buy something through one of these links, we may earn an affiliate commission.