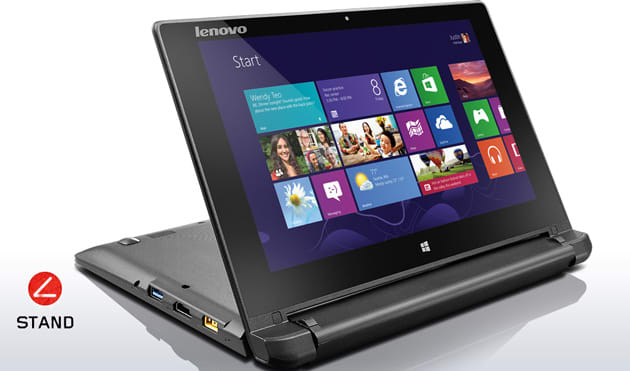 Aging Busta Rhymes witticisms aside, this new Lenovo might just be a contender for anyone on the lookout for a versatile Windows 8.1 machine. The Flex 10 is a 10-inch version of the Flex 14 and 15 models we've already seen, with the same 1,366 x 768 resolution and 10-point touch panel, but with a Bay Trail Pentium or Celeron processor instead of Haswell. It's a sort of half-way house between a fanless hybrid and a full-wattage laptop, and in some ways it offers the worst of both worlds -- for example, the base model provides a battery life of just four hours but has a relatively stocky weight of 2.6 pounds (1.2kg). On the other hand, the Flex 10 should run Microsoft Office and other productivity software at a faster clip than mobile-class machines like the Miix 10 or Miix2. Plus, it allows the screen to be flipped back 300 degrees into a "stand" mode, likely without costing as much as a Core i3-powered Yoga 11S -- assuming the unconfirmed starting price of $550 proves to be accurate. Lenovo has a habit of adding products to its website before releasing full pricing and availability, so we'll update this post when we learn more. (Woo Hah!)

Source: Lenovo
In this article: bay trail, celeron, flex 10, laptop, lenovo, lenovo flex 10, netbook, pentium
All products recommended by Engadget are selected by our editorial team, independent of our parent company. Some of our stories include affiliate links. If you buy something through one of these links, we may earn an affiliate commission.