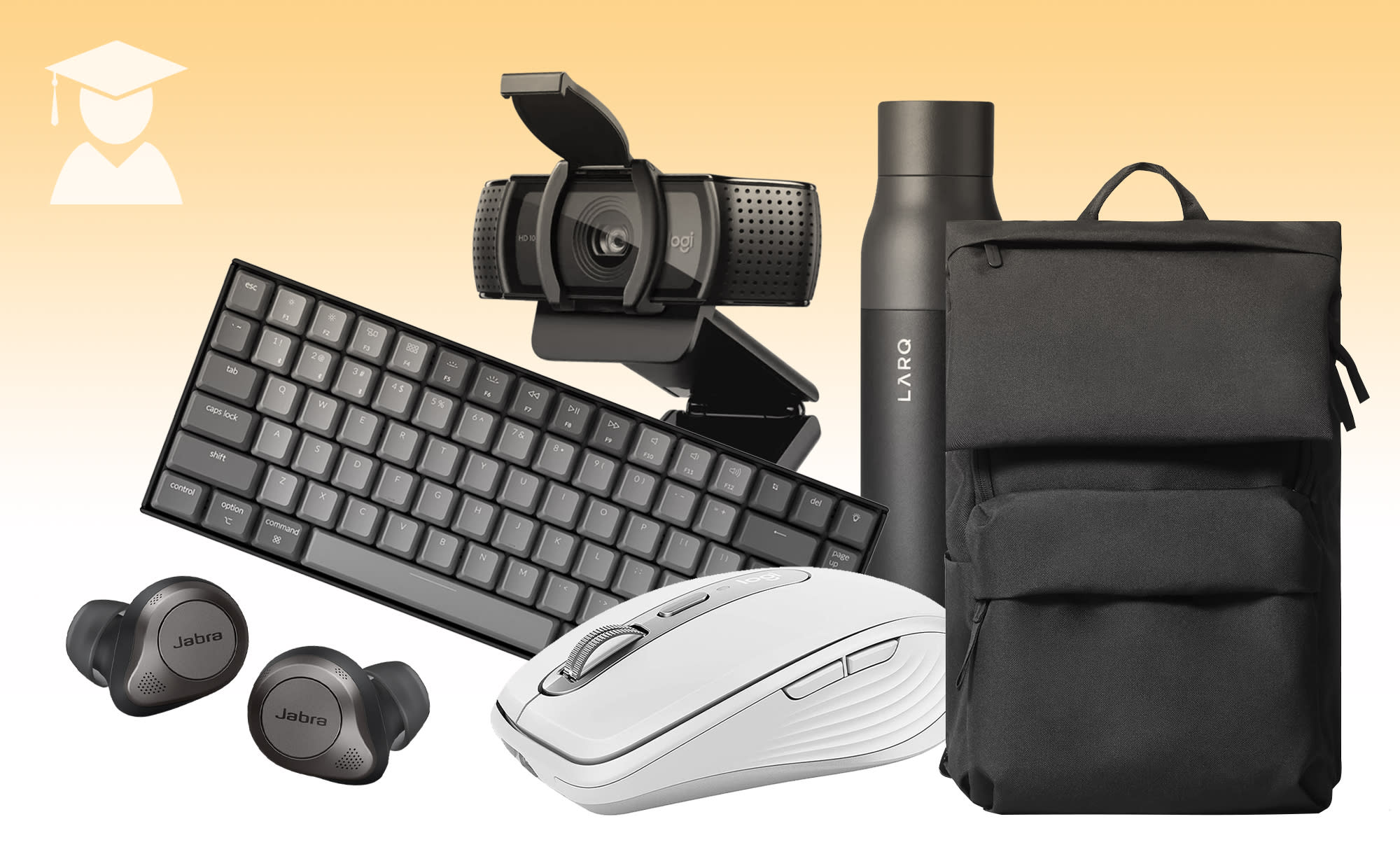 The best work-from-home and office essentials for graduates

Regardless of where they work, these gadgets will help them get it done.

N. Lee
@nicole
May 5th, 2021
In this article: thebuyersguide, graduationgg2021, gear, everlane, dell, anker, logitech, feature, shopping, centralcommerce, jabra, keychron, warby parker, commerce, streamshopping, shoppable, LARQ, ccttech
All products recommended by Engadget are selected by our editorial team, independent of our parent company. Some of our stories include affiliate links. If you buy something through one of these links, we may earn an affiliate commission.

After they’re done celebrating their academic accomplishments, your grad might already have a new job or internship lined up, or they may be very close to a new opportunity. If so, they’ll want a few essentials that will ease them into the working world, whether they’re dealing with a daily commute or logging on from home. Here are a few gift ideas that they’ll appreciate regardless of where they find themselves doing most of their work.

Carrying a reusable water bottle on your commute is a smart idea, but what’s even smarter is a bottle that cleans itself. The LARQ Bottle PureVis claims to neutralize up to 99.99 percent of odor-causing bacteria using UV-C light, which means there’s less chance of it stinking up between refills. Either press the button at the top to trigger the clean, or simply wait; it automatically cleans itself once every two hours. The PureVis model also has thermal insulation that can keep drinks either cold or hot.

If they don’t mind cleaning their bottle, however, the Contigo Autoseal transit mug is a more affordable alternative. It’s wide enough to fit most cup holders and it has a handy Autoseal button which lets them drink out of the bottle when held down. As a bonus for coffee aficionados, both an Aeropress and a drip filter cone fits nicely over it, so you can brew your cup of joe directly into the mug.

A good backpack is essential for commuting, especially if your grad has to tote their laptop back and forth each day. One of our favorites is the Everlane Renew Transit Backpack thanks to both its exterior, 15-inch laptop sleeve and assortment of interior and exterior pockets. It also has two water bottle holders and a pass-through strap that attaches to rolling luggage. Another plus is that it’s made out of 100 percent recycled polyester and has a water-resistant finish.

For a slightly roomier option, the Timbuk2 Authority Laptop Backpack Deluxe is great if they plan on carrying a lot of gear. There’s a rear access pocket fit for a 17-inch laptop as well as a large main compartment that’s big enough to carry a change of clothes along with cables, chargers or a portable keyboard. There’s also a side stretch pocket big enough to fit a travel mug or water bottle.

An external monitor is an absolute essential for those working from home most of the time. Not only is it ergonomically better than hunching over a laptop all day, but external monitors also provide more screen real estate. We especially like the Dell Ultrasharp U2720Q thanks to its 4K screen resolution, adjustable height stand and array of ports that they can use to charge their laptop as well as other accessories. It comes with a HDMI port, two USB-C ports, a DisplayPort, a 3.5-mm headphone jack, and two USB-A ports. One more feature that’s especially useful if they plan on coding: the monitor can rotate 90 degrees so it can be used vertically as well as horizontally.

In addition to an external monitor, we also recommend an external keyboard. If your giftee is into mechanical keyboards, one of our favorites is the Keychron K2 because it’s portable, stylish and comes in wireless and wired options. It’s also compatible with both Mac and Windows. Editor-at-large James Trew says it’s a delight to type on, and it doesn’t take up much desk space either.

If the idea of a keyboard that goes clickety-clack drives you up the wall however, then a more conventional keyboard might be more your speed. In that case, we recommend the Logitech K380 multi-device Bluetooth keyboard, which still has responsive and comfortable keys. It can be used with up to three different devices so you can use it with both your laptop or your tablet if you so desire. Its battery life is also to be commended — it can last up to two years with just a couple of AAA batteries.

Most laptops only come with a handful of USB ports, which isn’t ideal if your grad needs to charge multiple devices at the same time or if they simply have a lot of accessories. If that's the case, we recommend the Anker 10-port 60W USB 3.0 hub, which has seven USB-A 3.0 data ports plus three 12-watt power ports that are dedicated for charging. They’re equipped with Anker’s PowerIQ tech, which promises fast charging at up to 2.1 amps per port. The device is also slender and compact so it won’t take up much desk space.

Another wise addition to your grad’s WFH setup is a wireless mouse like the Logitech MX Anywhere 3. Not only is it small and compact, but it has customizable side buttons that can lead to app-specific shortcuts in programs like Chrome, Adobe Photoshop or Microsoft Word. You can even map it to control camera and mic settings during video chats in Zoom or Microsoft Teams. The wheel can be used for vertical scrolling or side scrolling, with the latter being especially handy for those who work in Excel or Google Sheets often. Another perk is that it has 4000-DPI Darkfield technology, which helps it track on any material including glass.

In the age of Zoom calls and Google Meet video conferences, webcams have become essential. Like many of us, new graduates have probably relied on their machine's built-in camera until now, but that just won't cut it if you're video conferencing multiple times a day and also care about looking good. An external webcam can make all the difference — our favorite is the Logitech C920s Pro HD webcam thanks to its 1080P video quality, autofocus capabilities and decent white balance adjustment. It also has a large 78-degree field of view plus a lens cover that will help protect your privacy when it’s not in use. On top of that, it has a solid pair of built-in microphones, and you can adjust settings like autofocus, brightness and contrast via the Logitech Camera Settings app.

Another must-have for a peaceful commute is a pair of quality earbuds. One of our favorites is the Jabra Elite 85t, which offers active noise cancellation and the ability to customize the levels of ambient sound. It also comes with six presets and you can also adjust the EQ levels to your liking. What’s more, it comes with a MySound audio test that will optimize the earbuds to your unique hearing characteristics.

It has a stylish and comfortable design plus wireless charging, so you can easily charge it simply by placing it on a QI-compatible pad. The charging indicator in the latest model is now located on the front, so you can see it when you open and close the case, making it a lot easier to see how much juice it has.

But for die-hard Apple fans, consider the Apple AirPods Pro instead. They have deeper bass than the basic AirPods plus they have active noise cancellation as well. Pairing the AirPods Pro with an iPhone is super easy; simply open the case, and it’ll connect instantly without having to go through bothersome Bluetooth menus. The new AirPods Pro are also water resistant, which means your grad is free to work up a sweat without worrying about damaging them.

If your grad is constantly on the go, a portable power bank is a must-have. We recommend the Travelcard Charger as it’s small enough to fit in their wallet and at 1,500 mAh, has just enough power to give their phone an emergency boost in case it’s running low. There’s a built-in USB-A cable and you can purchase it in either Lightning, micro-USB or USB-C configurations depending on which connection their phone has. No, it won’t charge up their phone from empty to full, but the Travelcard will provide enough power for them to order an Uber or call a friend, which could prove to be a life saver.

Sunglasses might not be a necessity, but on bright sunny days, your grad will be grateful for having a pair. If you give them a gift card from Warby Parker, they can pick out their favorites and even “virtually” try them on using an AR-enabled app. Alternatively, Warby Parker also offers a home try-on program where they deliver up to five pairs for them to try and figure out which one suits them best. Plus, if their city has a brick-and-mortar Warby Parker store, it’s pretty easy to return unwanted pairs that way.

The best gaming gear for graduates

The best gifts for grads under $50

The best gifts to upgrade your grad’s tech setup

The best work-from-home and office essentials for graduates

The best travel gear for graduates

The best self-care gifts for graduates