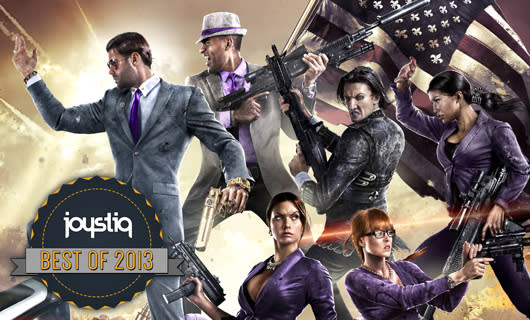 The developers at Volition Inc. have successfully mated the tightest gameplay in the Saints Row series to date with its most over-the-top weapons (including flight, telekinesis and other superpowers), most drawn out, ridiculous celebrity cameos, and some of the finest funny video game writing ever scribbled down. Granted, the game has its fair share of lowbrow poop jokes (not to mention weaponized sex toys), but at the same time it's apparent that the writers at Volition are some very clever people. Saints Row 4 rarely relies on memes or easy humor, and the surprisingly deep level of satire underlying the experience is simultaneously welcome and totally unnecessary to your enjoyment of the game.

Here, your character and other members of your gang will monologue on their evolution over the past four games or explain their motivation in a scene while you're busy trying to fight off hordes of aliens. When your character grows concerned at how many cracks are forming in the game's fourth wall, your fellow Saints hand-wave this away, as if to say, "Relax, we're in a video game. It doesn't have to make sense as long as you're having fun." It's not often you find a game that can be described as self-deprecating, but that's part of Saints Row 4's charm: Nothing is taken seriously. Aliens threaten to destroy the planet? Giant statue run amok in the middle of the city? Johnny Gat needs your help fighting through a particularly detailed riff on Streets of Rage? In most other games these would be seen as tense moments that demand rapt attention, but Saints Row 4 never loses its flippant attitude. In the hands of a more cynical developer this could easily have come off as bratty, but even when your character is beaten to a bloody pulp the game always matches the darkness with light-hearted glee.

This duality is the best measure of how successful Saints Row 4 actually is. It offers players an adventure that taps the primal urge to destroy and wreak havoc, but always immediately counters this with a wacky stunt. Run down a dozen random people, then enjoy a Biz Markie singalong. Freeze an alien ship in the air, watch it shatter, then sprint up the nearest extraterrestrial and lay the alien jerk out with the most devastating powerbomb this side of Vince McMahon. Virtual Steelport is your oyster, so enjoy blowing it to pieces.

There is no one right way to enjoy Saints Row 4, and that's why it's on this list: It may not be all things to all people, but for many of us it offers the ideal blend of wit, satisfying action and utterly silly chaos.

Joystiq is highlighting its 10 favorite games of 2013 throughout the week. Keep reading for more top selections and every writer's personal picks in Best of the Rest roundups. The list so far:
In this article: best-of-2013, Deep-silver, goty-2013, joystiq-best-of-2013, microsoft, pc, playstation, ps3, saints-row-4, Volition, volition-inc, xbox
All products recommended by Engadget are selected by our editorial team, independent of our parent company. Some of our stories include affiliate links. If you buy something through one of these links, we may earn an affiliate commission.