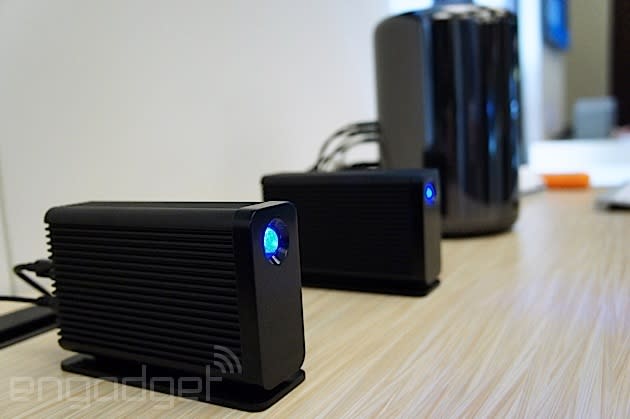 When Intel officially ushered in Thunderbolt 2 back in June, it promised that we'd see devices sporting those blazing-fast speeds soon. It seems LaCie was one outfit poised to embrace the tech as the storage company has just announced the Little Big Disk Thunderbolt 2. The successor to the original model, version 2.0 touts transfer speeds of 1,375 MB/s, thanks to Intel's port, and a new all-black paint scheme on its aluminum shell. Inside, two 500GB PCIe Gen 2 SSDs in RAID 0 can wrangle 4K and 3D video edits -- power that should properly arm the creative lot for hefty fieldwork. That interior space has also been designed to properly handle heat distribution so that the virtually silent, thermoregulated fan need only kick on every now and then. There's no word on pricing just yet, but the storage gadget is set to arrive later this quarter.

We were able to see the new Little Big Disk in action in order to catch a glimpse of its speeds. During our time with the unit, we observed write speeds of 1,200 MB/s and read marks at 1,300 MB/s -- transferring a 300GB file in about four minutes. Thankfully, the drives that were set up ahead of our arrival, and had been sorting files for some time, remained at nearly room temp. With two of the Thunderbolt 2 drives set up in RAID 0, we witnessed 2,000 MB/s write speeds and 2,600 MB/s read numbers. Although the front plate of the new unit is glossy, the entire enclosure is still metal and the black paint job looks quite nice beside a new Mac Pro. In this article: ces2014, externalharddrive, hands-on, lacie, littlebigdiskthunderbolt2, storage, thunderbolt2
All products recommended by Engadget are selected by our editorial team, independent of our parent company. Some of our stories include affiliate links. If you buy something through one of these links, we may earn an affiliate commission.