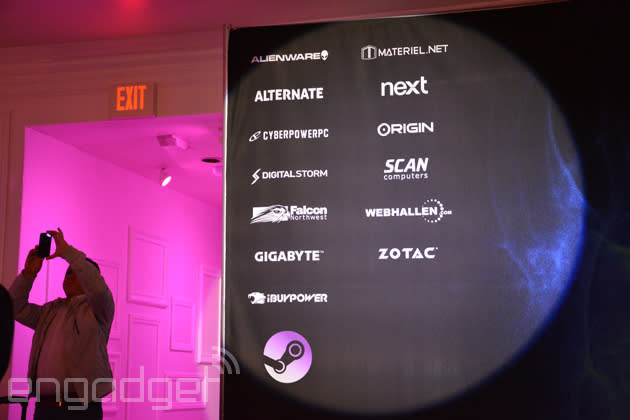 Valve's Steam Machines initiative is supported by a first-party box that 300 beta users have right now, but 2014 is all about third-party Steam Machines taking that reference box and running with it. Thus far, the only third parties we know of that're making Steam Machines are iBuyPower and Digital Storm -- today, that all changes. Alienware, Falcon Northwest, iBuyPower, CyberPowerPC, Origin PC, Gigabyte, Materiel.net, Webhallen, Alternate, Next, Zotac and Scan Computers are among the first companies signed on to support Valve's initiative, Engadget learned this afternoon.

The entire lineup will be on display this week at CES 2014, and we'll have many more details in the coming days. Beyond the dozen companies above, it's totally possible that there are other third parties signed on for Steam Machines -- we'll have to wait and see when Valve unveils everything at its press conference tomorrow afternoon.

Update: As seen in the image above, live from Valve's CES 2014 presser, those third-party manufacturers are double confirmed. Maingear is the final addition that makes 14 in total.

In this article: alienware, Alternate, ces, ces2014, CyberPowerPC, Falcon Northwest, falconnorthwest, Gigabyte, hdpostcross, ibuypower, Maingear, Materiel.net, Next, Origin PC, Scan, steammachines, valve, Webhallen, Zotac
All products recommended by Engadget are selected by our editorial team, independent of our parent company. Some of our stories include affiliate links. If you buy something through one of these links, we may earn an affiliate commission.