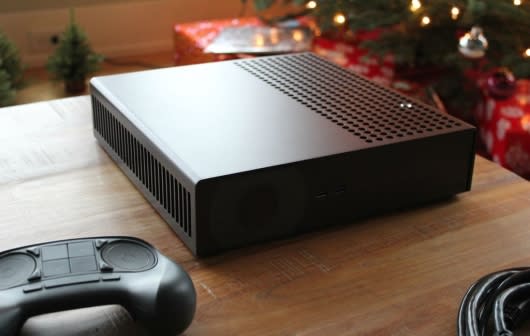 Valve wants a piece of your living room, and it's taking several approaches to make it happen, not the least of which are Steam Machines. Watching Valve's Steam Machines evolution from rumor to concept to hardware beta has been a fascinating process, and now that we've been allowed some hands-on time with one of these quasi-consoles, we're here to tell you what we think.

Before we get started, first thing's first: the hardware beta Valve is currently running is just that, a beta. This means everything you're about to read is subject to change. Heck, we already know Valve is partnering with multiple manufacturers to produce various hardware configurations, so who can say what elements will stay the same and what will change?

That being said, we're going to try and give you an idea of what to expect based on what we've experienced.

Pictures of Valve's Steam Machine flooded the Internet when hardware beta participants received their shipments, and what we saw was pretty much what you'd expect: a big, black box. The front of the Steam Machine we tried featured a minimalist design with just two USB ports and a large, circular power button surrounded by a larger ring.

The center circle is a physical button, so in that sense the Steam Machine beta hardware felt a bit more old-school than some of our modern, touch-oriented technology. Once powered on, a thin, white ring lit up to indicate power. The thicker part of the ring that goes around the power button doesn't seem to be anything more than visual flair. The system was well ventilated, with holes and slots for air flow on just about every face. This design choice also gave the Steam Machine a very appealing side view, since the illuminated text on the installed Nvidia graphics card peeked through the grill. The top of the Steam Machine could be easily removed – just one screw kept everything in place, and removing the cover was a simple lift and pull. Unlike today's consoles, the Steam Machine looked as though it was built to be upgraded, just like a PC. Removable graphics cards, memory and hard drives were all on display.

While there will be many different Steam Machines with varying internal configurations, the one we experienced was likely the prototype for a higher-end model. Powered by an Intel i5 processor clocked at 3.20 GHz with 16GB RAM and an Nvidia Geforce GTX 780 with 3GB of graphics memory, the system might not be the fastest horse in the race, but it's no slouch, either. The only real oddity here was the use of an external WiFi antenna instead an internal one.

If looking inside wasn't an option, just looking at the rear panel should give you an idea of how much technology was shoved into this box. There were multiple video outputs, including HDMI and DVI, along with inputs for mouse and keyboard, ethernet, and USB. Suddenly an external WiFi antenna makes a lot of sense; maybe there just wasn't room inside. With all of its components so densely packed together, it should be said that this particular Steam Machine was heavy. We didn't have a scale available to weigh the thing, but we'd say it rested somewhere between the weight of an original Xbox and a high-end home theater receiver. This was not something you would pick up and carry leisurely around your local Walmart or Best Buy. For better or worse, the weight did give the Steam Machine a sense of value – this didn't feel like a flimsy, plastic toy, it felt like a machine, ready to go to work.

The same cannot yet be said of the controller.

Ever used a mouse with a trackball in it? That's what sliding your thumbs across the surface of Valve's controller felt like. The surface of each thumb ... pad? Thumb place? ... was a single, solid piece, but we could still feel a sense of sliding and spinning underneath the thumb, particularly when we gave a good, hard flick to any direction. There were tiny clicks for a bit of resistance, and listening to them also gave us an idea of how fast we were turning the wheel.

We played Hotline Miami and Portal with the controller, and found the experience lacking on both, though the issues were less obtrusive in Valve's signature puzzler. The lack of a physical stick means no resistance, and that takes some getting used to. We also noticed that for people with larger thumbs, there may be an issue of unintentionally sliding across the pad while reaching for the face buttons. Thankfully, the controller can be remapped with ease because, interestingly, it doesn't register as a controller. When plugged in – the beta controller lacks an internal battery, so plugging in is required – Valve's controller registers as a mouse and keyboard. Keep that in mind, because it's going to be important in just a second.

The controller can be used on machines other than those from Valve, and the Steam Machine, in turn, can receive input from other manufacturers' controllers. We were shown how a wireless Xbox 360 controller could connect to the Steam Machine as easily as it could to any modern PC, and indeed it functioned just as well, with no noticeable lag or issues. The 360 controller, however, did register as a controller. Learning how to properly hold Valve's controller was another lesson that took some time. Both of the thumb pads can register depressions as button clicks, but there are also four face buttons (A,B,X,Y), a center face of four more buttons (these were currently not enabled), two shoulder bumpers, two triggers and two more buttons on the underside of the controller on the handles. These rear buttons required the biggest adjustment, as we couldn't wrap our fingers around the controller like we normally would, lest our fingers accidentally click one.

PC-centric gamers may come to love the quick and painless configuration of Valve's controller, but right now, we'd be hard-pressed to say it's as or more accurate than the mouse and keyboard they already own. Console gamers eyeing a Steam Machine should likewise be aware that the controller, if it remains as is, will likely be different from any controller they've ever used before. Either audience has a learning curve ahead of them if they want to use the Steam controller, but at least it doesn't look like they'll be forced to use it if they don't want to.
In this article: beta, hands-on, hardware, pc, preview, steam, steam-box, steam-controller, steam-machines, steamos, valve
All products recommended by Engadget are selected by our editorial team, independent of our parent company. Some of our stories include affiliate links. If you buy something through one of these links, we may earn an affiliate commission.