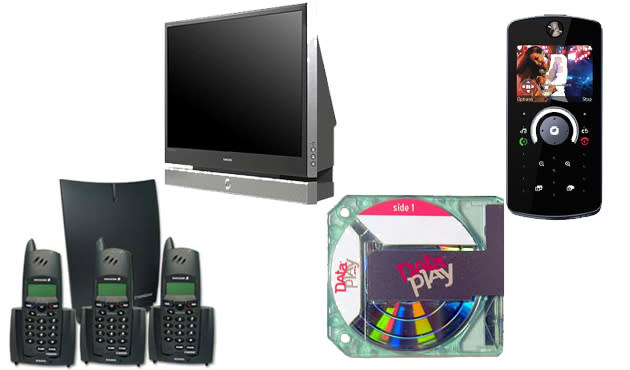 Who remembers the CyberGenie cordless phone system from Cygnion? Truth be told: We don't either. That's understandable, though, as it came out nearly 15 years ago. While it might seem like this fairly low-tech (by today's standards) piece of office equipment is a million miles away from what's on Engadget these days, back in 2000, thanks to its unified messaging features and personalized auto-attendant, the CyberGenie was considered innovative enough to be voted Best in Show at that year's CES awards. Coincidentally, it's Engadget that has the honor of deciding which of the thousands of products on display will be worthy of that same title this year. We take a look at a few of the key highlights from the history of CES awards.

Of course, this is quite a responsibility, and with so much new and innovative technology on display, picking the best in each category is challenging. For example, CyberGenie's ability to notify users anywhere in the world when new voicemail, email or faxes arrived may have excited gadget fans back then, but it's something that would barely get a mention on a press release today. In this regard, looking back over the history of the CES awards gives a delightful insight into some of the problems we've faced in our daily lives, and how technology was employed to solve them.

In 2001, for example, the problem was evidently boredom -- as that's the year that the original Xbox was unveiled at the show. But it was an optical disc -- the ill-fated DataPlay format -- that went on to snag the top award, before ultimately shuffling off into obscurity. On the other hand, 2005 was all about true HD/1080p. Samsung's 67-inch HLR6768W TV might look bulky and cumbersome by today's standards, but nearly 10 years ago, this was probably the nearest you'd get to a wall-mountable full HD set -- if your walls were made of meter-thick concrete that is. Samsung's well-known for both TV and mobile these days, but it was already in the game back then. In 2005, it wasn't a Galaxy S picking up acclaim; no, it was the snazzy Samsung i730, complete with Windows Mobile 2003, a 65,000-color display and, of course, EVDO/3G. Compare both of those products to current offerings, and you'll see just how far we've come.

Two years after Samsung scooped the top prize, another Korean firm, LG, would get its time in the spotlight. Once again, home entertainment and physical media dominated the show, with the top prize in 2007 going to a machine that ticks about as many CES boxes as you could hope for: the LG BH100 HD DVD and Blu-ray combo player. The BH100 was notable for its ability to play both formats from the same disc tray, but functionality came at a price -- an impressive $1,200 price tag. Ultimately, and perhaps unsurprisingly, the hefty price tag wouldn't be the biggest setback the BH100 faced. The fairly rapid demise of HD DVD soon after would render that half of the deal somewhat limited in appeal, making this one heck of an expensive Blu-ray player. Home cinema and entertainment always feature prominently at CES, but 2007 was an especially viewing-friendly year, as even the winner of the cellphone category was Verizon's Wireless V Cast TV.

The living room continued as the inspiration for the Best in Show award a year later when Philips took the top title with its Eco TV, but 2008 also reminded us how fickle technology can be. Motorola caused more than a few head-scratches when its Rokr E8, complete with eye-catching design, only offered 2G connectivity, but still won the cellphone category. Meanwhile, iRiver -- remember iRiver? -- bagged the top spot in the portable media player category with its W7 PMP. While the 480 x 272 display and lack of WiFi might make it seem an unlikely winner, a 3-inch touchscreen media player in 2008 was still something worth talking about.

As this list demonstrates, technology is, by its very nature, transient, or prone to self-cannibalization. A fact no more eloquently proven than by 2009's Best in Show and People's Voice Award winner: the Palm Pre. You might think that taking home two gongs would solidify the Pre's place in the technological zeitgeist of the time, but the historical facts tell a different story. The webOS platform it ran might have been "all new" at the time, and the combination of touchscreen and full QWERTY keyboard certainly could have given it broad appeal, but both are also excellent reminders of how quickly the public's tastes can change. Both the operating system and the physical keyboard eventually fell into relative obscurity in the years that followed (the former, not least thanks to HP). But of all the items in this article, it's hard not to see the Pre as the harshest example of technology's temporary nature. The top-spot spoils between 2010 and 2013, however, were shared between TVs and -- for the first time -- tablets, showing both a new form factor gaining prominence, and the reliable consistency of home theater wares winning over judges.

While it may seem easy to paint this as a cautionary tale -- a long list of since forgotten gadgets -- there's a part of all these award-winning devices that lives on today. Whether it's the full HD display in your mobile, or the gradual move away from physical formats, or even the ability to notify users anywhere in the world when new voicemail, email (or even faxes) arrive, there's a little bit of "Best of CES" in everything that surrounds us. And this is, perhaps, the real job that rests at Engadget's feet in 2014: spotting the features, functions, designs and trends that make a gadget stand out from the rest. Particularly those that will then be adopted, improved upon and ultimately rendered obsolete in the grand silicon circle of life. So, you might be thinking "no pressure, Engadget," but we prefer to think of it as a responsibility.

In this article: best of ces, ces, ces2014, gadgetry, gadgets, gear, TL16CESHIST
All products recommended by Engadget are selected by our editorial team, independent of our parent company. Some of our stories include affiliate links. If you buy something through one of these links, we may earn an affiliate commission.