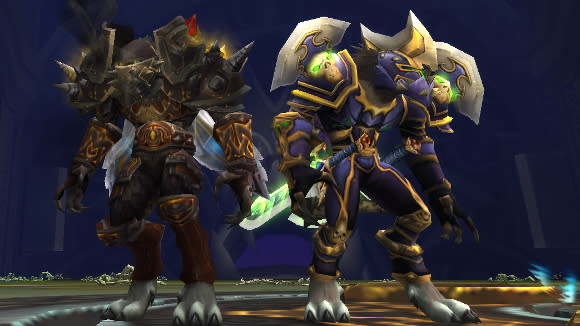 It should be noted that these are not features that have been announced, nor even speculated about or teased to my knowledge - if they have, I missed them somehow. It's possible. I'm human, I miss things. But I was thinking about the features announced for Warlords of Draenor (including recent announcements that blood elves and draenei will be among the races who get new models) and I realized that there's all sorts of things I'd like to see that haven't even been mentioned yet, and while I don't expect they'll happen, I might as well share them with you in the hopes that they may end up arriving at some point down the road. After all, transmog and LFR happened in the middle of an expansion, and they both worked out pretty well.

So here we go.

This is one I've wanted for a while. With flexible raiding now a reality, I'm drawn back to the idea of being able to scale your level down to run older content with friends, something the late, lamented City of Heroes had (called mentoring/sidekicking in that game). We've been teased with this potentially existing as recently as October of 2013 and whether or not it was a hoax then (I personally have no idea) it's something I've wanted for years. Sure, it's fun to bring your level 90 to an old dungeon and blow it up sometimes, but I want the option to step myself down and run it at an appropriate level in appropriate gear if I so choose. I'd also like to be able to boost a friend up to my level so that we can run stuff together, although I suspect the free level 90 boost is aimed at handling this same problem. Basically, anything that lets friends do more stuff together, I'm down for.

And speaking of that... Put everything in the raid finder

I mean everything, and for everyone. Put all old raids in LFR - Molten Core, Tempest Keep, ICC, Firelands. Put Dragon Soul LFR back for players who are above level 85. Let people chain run old raids via LFR if they want to. (Since LFR only lets you get loot once anyway, it's fine.) Put all the loot from old raids run via LFR on the personal loot system, so instead of vendoring the Nemesis shoulders again you only get stuff that you can use for transmog. I realize this would be a lot of work. It's a wish list, not a reasonably-calculated-cost-and-value-analysis list.

I also want LFR opened up to more people. At level 60, LFR should offer you all the currently existing level 60 raids at the proper size. Yes, that means 40 man raids in vanilla LFR. Let people who wax nostalgic for that time experience it for themselves in a full 40 player level 60 raid. Let level 70's who want to live in BC forever run Black Temple every week for a shot at those Warglaives. It's been stated repeatedly that LFR is intended as a tool to allow players to see the content - let's see it expanded to let more players see more content.

Not just new BG's, new arenas - it's time to get whole new kinds of player on player murder happening. Places like the Gurubashi Arena and items like the Censer of Eternal Agony on the Timeless Isle have me thinking that what we need most in PvP are changes that shake up the status quo. Imagine a kind of scenario for PvP - something akin to a battleground, but which randomly assigned Horde and Alliance players to random teams so that, like with the Censer, you could have Horde and Alliance players on the same team, fighting another random team also comprised of Horde and Alliance players? Or a three way battle between Horde, Alliance, and a third faction - perhaps a PvP recreation of the Zombie Outbreak, with some players being placed in the temporary Scourge faction for the duration of the battle?

I'm tired of complaints about faction imbalance in BG's - making it so faction was randomized, or could be malleable depending on circumstances, would go a ways towards making it less of an issue. I'd also like to see arenas go beyond two teams - imagine 5x5x5 arenas where three teams fought, each team hostile to the other two? Or make a size somewhere between rated Battlegrounds and arenas, something that mixed and matched their play?

I mean real sets, with set bonuses and everything. The last time we got one was in Burning Crusade, if I'm not mistaken, with sets like the Bold Armor set. Sure, we've had some visually thematic sets since then - both Wrath and Cataclysm had pieces that went together visually, as did Mists of Pandaria in its heroic dungeons - but I'm talking the whole deal. Not just pieces that look like they belong together, but pieces that do actually belong together, that have set bonuses and reward putting some or all of them together. And I'd like to see it be a full eight piece set like the original Battlegear of Valor, not the smaller five piece sets of BC.

Part of it is probably pure nostalgia on my part - I remember collecting the complete Valor set on two warriors, and it was at time pretty grueling, but it also got me invested in dungeons. Running LBRS and UBRS for my Valor kept me invested, kept me forming groups and heading to the mountain. I think giving people who run primarily in five mans a prestige option like this is definitely worth it.

So here we have my list. What's yours? What features do you wish for?

In this article: features, lfr, pvp, warlords-of-draenor, wish-list
All products recommended by Engadget are selected by our editorial team, independent of our parent company. Some of our stories include affiliate links. If you buy something through one of these links, we may earn an affiliate commission.