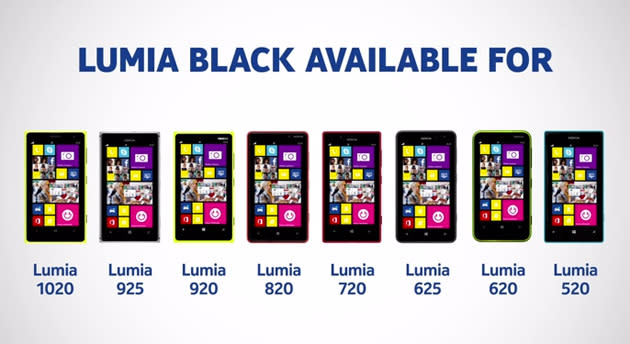 Nokia knows how to start a new year properly -- it gave Americans a first shot at the Lumia Black update as 2013 came to a close, and it's starting 2014 by rolling out the software to Lumia owners around the world. The Windows Phone 8 upgrade is reaching the Lumia 925 and 1020 first; other devices should get it in the weeks ahead. The fresh software brings common features like app folders, Bluetooth 4.0 LE support, an updated Glance screen and the unified Nokia Camera app. Some improvements depend on beefier hardware, however. You'll need at least 1GB of RAM to use Beamer transfers or Refocus image processing, and only 1020 owners can shoot RAW photos. Whatever device you're using, you'll want to hit that Phone Update option in the near future -- you may be in for a pleasant surprise.

Update: Nokia has posted App Folder as a separate download.

In this article: black, gdr3, lumia, lumiablack, microsoft, mobilepostcross, nokia, smartphone, update, upgrade, video, windowsphone, windowsphone8
All products recommended by Engadget are selected by our editorial team, independent of our parent company. Some of our stories include affiliate links. If you buy something through one of these links, we may earn an affiliate commission.