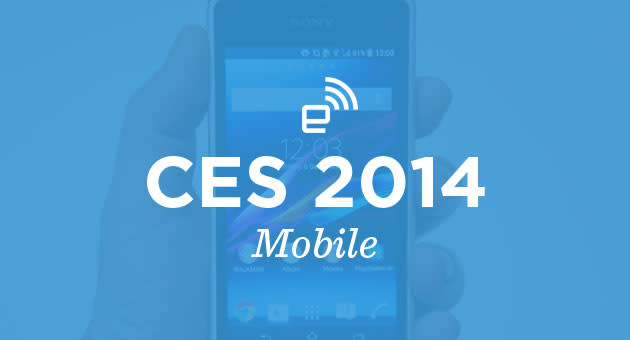 While this year was predictably quiet for smartphones, we weren't expecting it to be this quiet. Only a small sliver of companies announced new handsets at the show, and the ones we saw -- with the exception of the Sony Xperia Z1 Compact -- didn't impress. Even tablets, which have had pretty healthy showings in years past, failed to make an appearance. Naturally, this left a gaping void that needed to be filled by something, and wearables were up to the task. Read on as we take a look back at just a few of this week's mobile highlights.

Think phones and tablets have become too big? Don't be so silly; they're just getting bigger! Companies like Samsung and Hisense have sought to explore unbelievably large screen sizes on both types of devices: the former with its two 12.2-inch tablets, and the latter coming out with a 6.8-inch beaut. Samsung makes good use of the size by offering enhancements to multitasking and remote PC access, although we can't see any functional benefit from the Hisense X1's monstrous size aside from having as much space as you could like to have on your phone. Still, none of this should take anyone by surprise: It was only a matter of time before manufacturers started exploring these overlooked spaces.

Silicon was yet another area that didn't make much noise at this year's show, which means NVIDIA had the spotlight mostly to itself. The company introduced the Tegra K1, which, interestingly enough, consisted of two different chipsets. Both will offer an impressive 192 GPU cores, but the far bigger story here is that one of those two SoCs will have 64-bit support and two 2.5GHz CPU cores. On paper, this should be a rather impressive showing, but we'll have to wait until the first models come out later this year to make an official judgment. Qualcomm also announced a couple new chips at the show, both of which cater to specific areas like connected cars (another large trend this year, by the way) and home theaters.

Wearables got a lot of attention at this year's show, and we believe this just a small taste of what's to come in 2014. Pebble started things off with the Steel smartwatch, a much more elegant version of the watch it introduced last year. The onslaught of watches, fitness devices and glasses quickly ensued: More well-known names like ZTE, LG, Avegant, Epson and Archos had something to show off, and we also saw a load of newcomers trying to stand out above the noise. 2014 is a critical year for wearables; their success or failure in catching on with the mainstream public will largely depend on what comes out to market this year.
In this article: ces, ces2014, Galaxy Note Pro 12.2, Hisense X1, mobilepostcross, Pebble Steel, roundup
All products recommended by Engadget are selected by our editorial team, independent of our parent company. Some of our stories include affiliate links. If you buy something through one of these links, we may earn an affiliate commission.