DirecTV drops The Weather Channel, accuses it of loading up on reality TV

Dish Network, Raycom Media cut a deal and turn TV stations back on in 36 markets 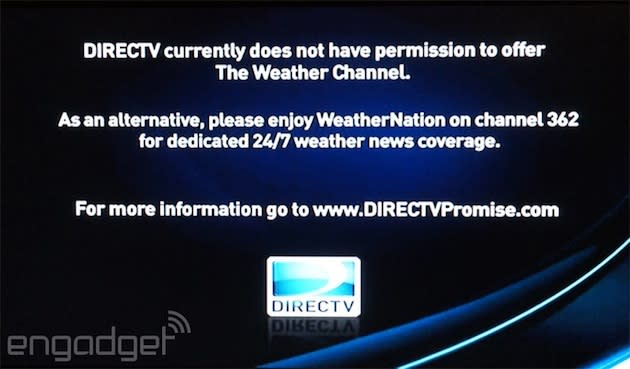 Usually, when there's a dispute over a pay-TV system carrying a channel, it hinges on sports or in-demand shows like Breaking Bad, The Walking Dead and Mad Men. This time, it's DirecTV sparring with ...The Weather Channel? Believe it or not, as of midnight ET, the venerable forecast standby -- and former good friend of the satellite broadcaster -- has been switched out for another channel since the two couldn't reach a new deal. As usual there's a war of words over who is in the wrong, with The Weather Channel claiming DirecTV's move puts lives in danger by replacing its experienced forecasters with a "cheap startup." In response, DirecTV says that TWC has shifted nearly half of its programming to reality TV and that besides WeatherNation (now broadcasting on 362 in TWC's place), it has weather news on local stations and emergency channels.

This fight is a surprising one, but we probably should've seen it coming once TWC launched an array of new shows and started randomly assigning names to winter storms. The only real question? With constantly updated weather info available from Google's search and almost any phone's home screen (TWC itself offers apps on platforms from Android to Apple TV), how long will it take before viewers notice the channel is gone?

In this article: carriage, directv, dispute, hdpostcross, theweatherchannel
All products recommended by Engadget are selected by our editorial team, independent of our parent company. Some of our stories include affiliate links. If you buy something through one of these links, we may earn an affiliate commission.