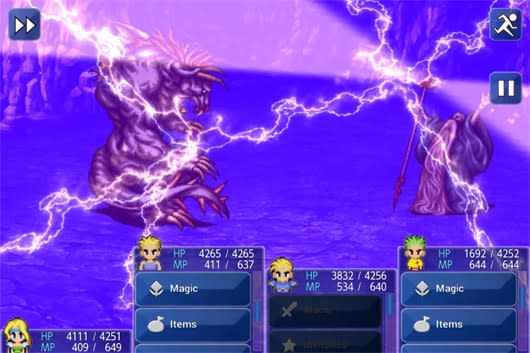 If you purchased Square Enix's revamped Android port of the classic Super NES RPG Final Fantasy 6 after it hit Google Play last week, you may want to put your playthrough on hold while its developers sort out a major bug affecting player progress. Currently, the game crashes at a critical point, making the latter half of its storyline inaccessible.

Players report that the glitch occurs during a climactic battle between Kefka and General Leo in Thamasa at the game's halfway point. A crash during a cutscene renders the game unbeatable, as story progress is stalled until required events unfold in Thamasa.

Publisher Square Enix acknowledges the bug in the game's Google Play description, and promises that an upcoming fix will soon allow players to travel to the Floating Continent and beyond. A release date for the patch has not been announced.
In this article: android, bug, crash, final-fantasy-6, final-fantasy-vi, glitch, mobile, square-enix, update
All products recommended by Engadget are selected by our editorial team, independent of our parent company. Some of our stories include affiliate links. If you buy something through one of these links, we may earn an affiliate commission.