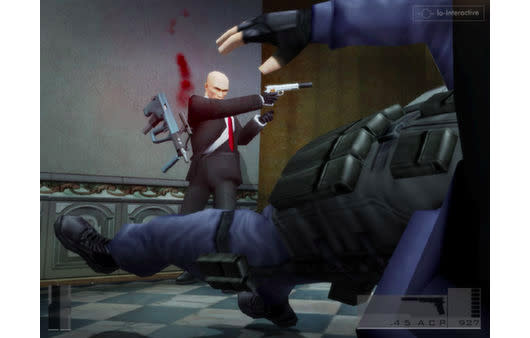 Hitman: Contracts, the third entry in IO Interactive's stealth murder series, is finally available for individual purchase on Steam. Previously the game was only available as part of the Hitman HD Trilogy, which bundled Hitman 2, Hitman: Contracts and Hitman: Blood Money into one convenient wannabe-murderer's package.

A music licensing issue surrounding a track in the "Rendezvous in Rotterdam" mission prevented Hitman: Contracts from being re-released as a standalone game on Steam. The Hitman HD Trilogy was able to sneakily sidestep this issue by replacing the song altogether; however, Steam users are currently reporting Hitman: Contracts has had its entire soundtrack and voice over tracks removed in the Steam version, so we've reached out to Square Enix for comment.

Hitman: Contracts, compatible with Windows PC, will set chrome dome assassins back $7 on Steam.
In this article: agent-47, hitman, hitman-contracts, io-interactive, pc, square-enix, steam
All products recommended by Engadget are selected by our editorial team, independent of our parent company. Some of our stories include affiliate links. If you buy something through one of these links, we may earn an affiliate commission.