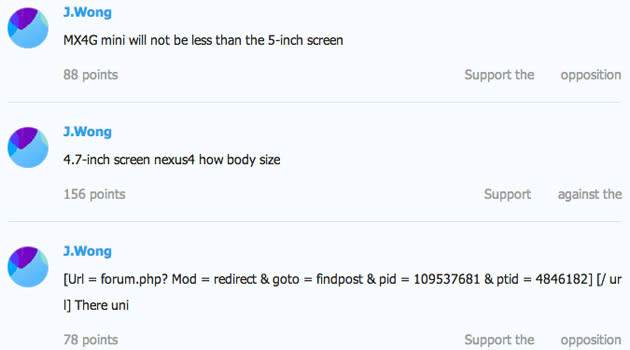 Meizu clearly isn't content to rest on its laurels. Just a few months after the MX3 first reached Chinese shops, the company's Jack Wong has teased a full range of MX4G smartphones that includes Mini, Uni and Pro variants. Wong isn't going into great detail at this early stage, but these will not be tiny devices -- even the Mini should have a screen that's at least five inches across, and he has already hinted that one or more variants will use a 5.5-inch, 2,560 x 1,536 display. The MX4G series may not ship for a long while; Meizu tends to launch flagships later in the year. Even if that's true, we suspect that many will like knowing what to expect so far in advance.

In this article: android, china, jackwong, jwong, meizu, minipost, mobilepostcross, mobilepostmini, mx4g, mx4gmini, mx4gpro, mx4guni, smartphone
All products recommended by Engadget are selected by our editorial team, independent of our parent company. Some of our stories include affiliate links. If you buy something through one of these links, we may earn an affiliate commission.