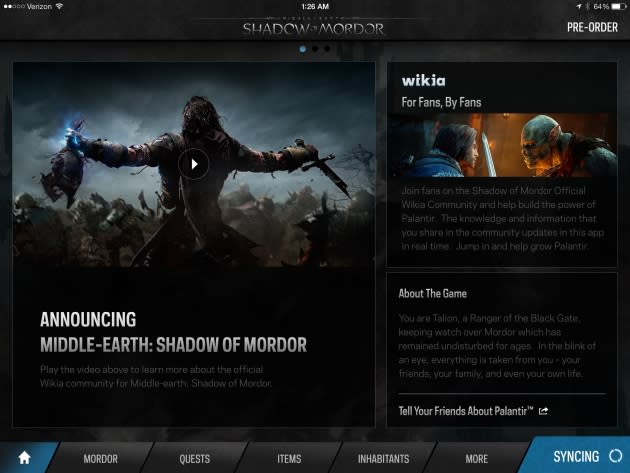 Apps like Shazam and Zeebox can listen to songs and TV shows and identify what's playing or what you're watching, but until now the tech hasn't been used much for gaming. A companion application for Middle-earth: Shadow of Mordor could change that. The Palantir iOS app (named after the networked seeing stones from Lord of the Rings canon) uses the aforementioned audio-sync technology to deliver exclusive content and contextual info (like walkthroughs) by listening in while you play the game. That content is curated from Wikia, which hosts vast reserves of lore, guides and minutia for games and pop culture. Shadow of Mordor doesn't have a release date just yet, but the Palantir app also works on trailers. If you want to give it a go for yourself, we've embedded the debut gameplay video after the jump.

In this article: CompanionApp, gaming, hd, hdpostcross, IOS, LordOfTheRings, middleearthshadowofmordor, mobilepostcross, palantir, wikia
All products recommended by Engadget are selected by our editorial team, independent of our parent company. Some of our stories include affiliate links. If you buy something through one of these links, we may earn an affiliate commission.