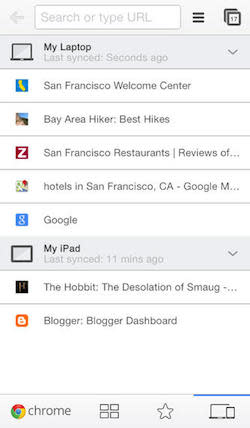 Google's recently announced update to Chrome for iOS is now available and brings along several previously unrevealed features. Users are now able to use Google Translate on their mobile devices to view pages written in other languages and access increased security when visiting potentially dangerous sites.

The update also introduces a new data-compression tool that aims to help reduce your mobile data usage while browsing. According to Google, the data-compression feature can reduce your browsing data usage by up to 50 percent. To access this update go to the "Bandwidth" tab in the app's settings and select "Reduce Data Usage Option."

While it was not previously announced, the update also introduces enhancements to the New Tab page that makes for faster, easier searching.

Users now see three buttons at the bottom of the "New Tab" screen that allow users to quickly switch between their most-visited pages, their bookmarks and the tabs they have open on other devices. Google plans on introducing these improvements across all the versions of Chrome, but the features are making their debut on iOS.

You can find the new version of Google Chrome in the iTunes Store.

In this article: chrome, chrome browser, google, ios, Software Update
All products recommended by Engadget are selected by our editorial team, independent of our parent company. Some of our stories include affiliate links. If you buy something through one of these links, we may earn an affiliate commission.