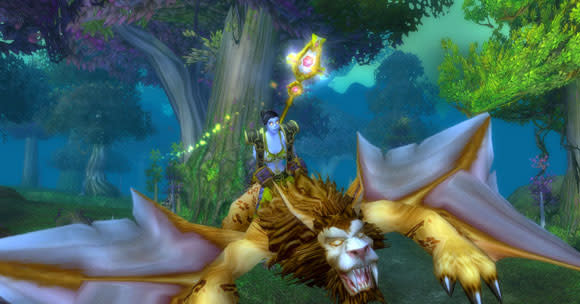 One of the weird things about playing a priest in vanilla WoW was the addition of racial abilities to the priest toolkit. Devouring Plague was strictly for Forsaken priests, dwarves had Fear Ward, night elves had Starshards, and so on. When you chose to play a priest, you not only chose the race you wanted to play because you liked to play it, you also had to think about what ability you'd be getting as well. I played a Forsaken priest not only because Forsaken were pretty cool -- Devouring Plague was exceptionally devastating as a Shadow priest. Most Alliance raid guilds had at least one dwarf in the mix, because Fear Ward was just that powerful when dealing with enemies like Onyxia and Nefarian.

These strange little racial quirks were removed when Wrath of the Lich King was introduced, and the most useful of these abilities -- Devouring Plague, Hymn of Hope, and Desperate Prayer -- were added to every priest's toolkit. As for Fear Ward, it was useful enough that it was removed even earlier, with patch 2.3.0 in Burning Crusade. At the time it made me a little sad, because it was one of those things that made priests strangely unique. Honestly, there was a part of me back then that wished other classes had the same kind of option -- an ability that was only useable by one particular race and class combo.

So I'm curious -- is this something that should come back? Would it be cool to have a race-only ability for whatever class you're playing? Do you think there's a way to implement that sort of thing without making players feel like they have to be a certain race in order to play a class optimally? What do you think would be cool for the race and class you play? And more importantly -- do you remember the days in which the Alliance were considered "super overpowered" in raids because they had the ever-essential Fear Ward?