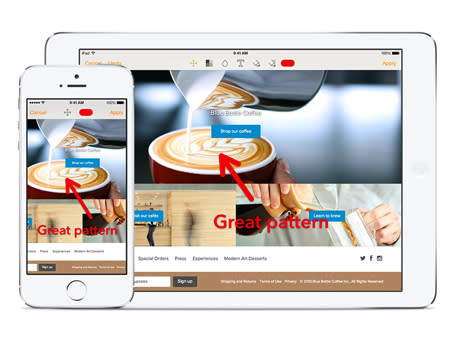 Realmac has updated its Ember image-collection and syncing tools, adding the much-requested annotations feature to the iOS app and a handful of smaller tweaks and features to its Mac app.

Ember is an image-syncing tool that collates photos from your Mac or iOS devices and allows you to sync these photos across devices via iCloud. It's similar to Photostream in iOS 7, but is significantly better than Apple's barebones offering. Besides iCloud syncing, Ember lets you tag and organize images into folders so you can build your own collections. The app also includes some basic editing tools that allow you to make tweaks on the fly.

One of the biggest new features that made its way into version 1.1 of the iOS app is annotations, which brings the smart drawing and text tools from the Mac to your iOS device. There are also two new tools that'll allow you to blur and pixelate parts of your images. A new auto-import feature will screen your device for new screenshots in your camera roll and add them to your library automatically. These images are then synced across devices with little to no intervention by the user.

Mac version 1.3 now has the new annotation tools blur and pixelate, which were also added to iOS. Other enhancements include the ability to back up your library, the option to hide previously seen subscription images, an improved browser contextual menu that has a selection for downloading images and more.

The published changelog for Ember for iOS and OS X includes:

Ember for iOS is free from the App Store, with in-app purchases that allow you to enable annotations (US$4.99) or unlock auto-import ($0.99). The updated Ember for the Mac is available for $49.99 from the Mac App Store for new users and is free for existing users.

In this article: ember, iOS, OS X, Software Update
All products recommended by Engadget are selected by our editorial team, independent of our parent company. Some of our stories include affiliate links. If you buy something through one of these links, we may earn an affiliate commission.
Share
Tweet
Share