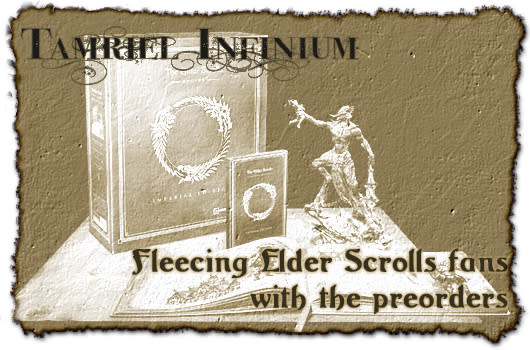 Are you as excited as I am about the Imperial Edition of the Elder Scrolls Online? When I introduced the announcement to my friends, I said something closer to, "Welp, this is a thing." Don't get me wrong; I am looking forward to the launch, and I will likely get the Imperial Edition because I want to play an Imperial. I played one in Skyrim and Oblivion; I want to play one in ESO, too. Some players are upset that if you get this collector's edition, the Imperial race is open to any faction. Even some of my friends are annoyed.

Another issue that struck them hard -- probably harder than the Imperial race addition -- was the preorder bonuses. And I'm not talking about the five-day early access. No, the hate swelled over the preorder ability to play any race in any faction. I'm sure that some of them would say that I am being obtuse, but I really can't wrap my head around why they seemed more upset about this bonus more than previous bonuses given for MMORPG preorders.

I'm a reasonable person: If something upsets someone else, I don't discount it as stupid or unreal, especially among people whom I consider my friends. Usually, if I argue a point with them, it truly is to understand their point of view. Specifically, I want to understand why one thing upsets them but not this other similar thing.

If we take a look at the Imperial race addition coming with the more expensive collector's edition of the game, we see that the purchasers of this box or digital copy gain a minipet, a mount, Imperial gear (which appears to be purely cosmetic), and access to a unique race. We've seen most of these bonus incentives in collector's editions before, even in my friends' current game, Star Wars: The Old Republic. The only exception is the Imperial race unlock. In recent memory, I can think of only the Drow in Neverwinter, which amounted to the same promotion. When that title launched last year, you could access the Drow only if you ordered a very expensive special edition, but Neverwinter is a free-to-play game and follows different rules.

And the Imperials will have but one skill line different from those of other races, one that will surely be balanced against the other racial skill lines. It has to. ZeniMax specifically said that there would be no pay-to-win. I'm not sure whether my friends accepted that line of thinking, but that skepticism stems from being burned by other MMOs over the years. However, based on what I've seen from past MMOs, if racials end up being too powerful, they are usually all nerfed until they become completely insignificant anyway.

If the racial abilities end up canceling each other out, then you are left with a cosmetic difference that you have to pay extra for. This is honestly not uncommon in MMOs, but some fans took Game Director Matt Firor's words to heart when he said that the subscription would cover 100% of the game. As a gamer in modern MMOs, I have come to understand that "100% of the game" usually means "except the cosmetic crap we will dump into the cash shop." And yes, ESO will have a cash shop. It's an unfortunate fact that today's MMOs ask for more on top of the $15 monthly subscription, even MMO giant World of Warcraft.

I will have to take the position of being OK with these Imperial Edition perks, assuming that there aren't racial abilities that make an Imperial more powerful than other races. I know for some people the character race is core to gameplay. As a roleplayer, I completely understand that feeling, but maybe I'm just used to being crapped on by cosmetics in other MMOs. Therefore, I'm no longer affected by it.

However, because I understand the importance of race and faction to some players, the other preorder bonuses do upset me a bit more. But why? Isn't it reasonable to reward players for being loyal to the brand with a unique gift? Let's compare apples to apples: Has there ever been a modern MMO that's offered racial faction unlocks as a pre-order bonus? I'm going to say no, but there are certainly games that offered unique cosmetic items as rewards, SWTOR being one among many. Its bonus item was a black and yellow crystal. Initially, players were upset about the +4 to endurance that the item gave, but at the time, they didn't realize that +4 was nearly nothing in the grand scheme of the game. So why is ESO's racial unlock so much more important than other items that give characters unique looks like SWTOR's color crystal?

The best answer came from my guildie Scott. He said that unlike a crystal color or piece of armor, a racial unlock fundamentally changes the way someone plays a game. Although other MMOs cut off certain races from certain factions, this enticement feeds into the player's longing to play the race he wants and the same faction as his friends without having to choose between them. And all he has to do to get this bonus is buy a game for which he's not seen any reviews, thanks to NDAs -- a game made by a company entirely untested in the MMO arena. For some players, that is a huge gamble. It's a gamble that makes them upset not because they're unwilling to pay extra to play what they want and avoid choosing between character race and friends but because putting money down on the product before release does nothing but ensure ZeniMax's investors' monetary return.

I can't say that I'm going to go on a tirade on some forum about this bit of fleecing. But I do ultimately think that this was likely yet another bad move on ZeniMax's part. I was going to preorder and get the Imperial Edition anyway, but I can certainly see why some fans have now chosen not to buy this game at all. How about you?

Each week, traverse the treacherous terrain of Tamriel with Larry Everett as he records his journey through The Elder Scrolls Online, an MMORPG from ZeniMax. Comments are welcome below, or send a message to larry@massively.com. He promises to keep the arrow-to-the-knee jokes to a minimum.

In this article: bethesda, bethesda-softworks, bethsoft, bonuses, collectors-edition, column, elder-scrolls, elder-scrolls-online, eso, featured, Imperial, imperial-edition, imperial-race, pre-order, preorder, races, racial-abilities, racial-unlock, tamriel, tamriel-infinium, teso, the-elder-scrolls, the-elder-scrolls-online, zenimax, zenimax-online, zenimax-online-studios
All products recommended by Engadget are selected by our editorial team, independent of our parent company. Some of our stories include affiliate links. If you buy something through one of these links, we may earn an affiliate commission.