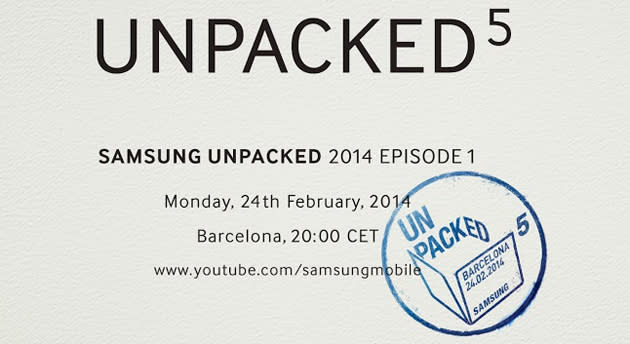 Samsung sure knows how to whet the appetite of its fans. The Korean tech giant has announced that it's holding an "Unpacked 5" event at Mobile World Congress on February 24th -- a potentially not-so-subtle reference to the upcoming Galaxy S 5. There's no guarantees that the new high-end smartphone will appear in Barcelona, especially when Samsung has only unveiled one Galaxy S device (the Galaxy S II) at the trade gathering. However, our invitation mentions a "flagship product," and it comes nearly a year after the company invited us to get "ready 4 the show" -- we all know what that digit was referencing. Whether or not the fifth-generation flagship makes an appearance at the event, you can be sure that we'll be there.

In this article: android, event, galaxy, galaxys5, invitation, mobilepostcross, mwc2014, samsung, smartphone
All products recommended by Engadget are selected by our editorial team, independent of our parent company. Some of our stories include affiliate links. If you buy something through one of these links, we may earn an affiliate commission.