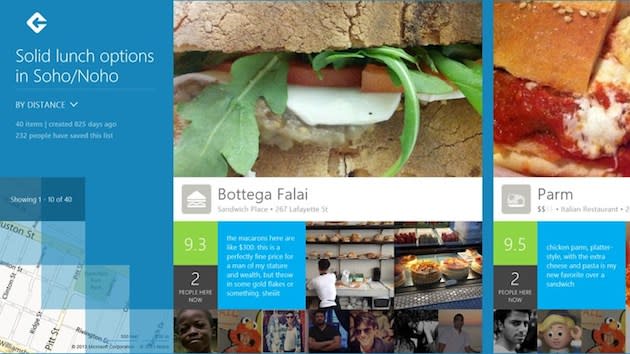 It may not be the biggest news to come out of Redmond in recent hours. Still, the Windows faithful will no doubt be interested to hear about a licensing agreement involving two pretty notable outfits. Today, Foursquare announced it has struck a deal with Microsoft to use its location data in Bing services and Windows-powered devices. This, naturally, includes search and maps for Bing; and, for Windows, phones, tablets, laptops and desktops -- and yes, convertibles too. In a statement, Foursquare notes that, "in the near future," Microsoft will be utilizing the newly acquired license to enhance its products with "contextually-aware experiences and the best recommendations of any service in the world." That's not it, however, as Foursquare also revealed Microsoft has invested ($15 million) into its socially-driven company, which it says will help the service continue to grow and be accessible by more people.

In this article: Bing, Foursquare, licensing, Location Data, LocationData, Microsoft, mobilepostcross, Windows, Windows 8, Windows Phone 8
All products recommended by Engadget are selected by our editorial team, independent of our parent company. Some of our stories include affiliate links. If you buy something through one of these links, we may earn an affiliate commission.