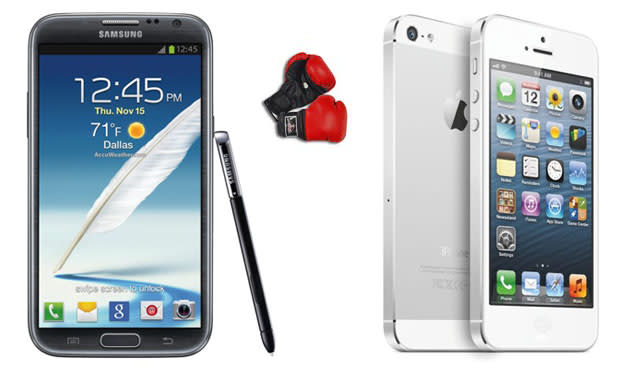 Perpetual court combatants Apple and Samsung have revealed their final list of allegations ahead of a trial starting March 31st. Though each started with five disputed patents, Samsung only has four now since a multimedia sync patent was knocked out earlier by Judge Lucy Koh. She also gave Apple a summary judgement win on its auto-complete IP, putting it ahead before the trial even begins. As for the rest, it's worth noting that all of Apple's patents are related to user interaction, while two of Samsung's are standards-essential (FRAND) patents -- which companies are normally obligated to license out. Samsung did have one point in its favor, however: the USPTO has agreed to take a second look at the validity of Apple's aforementioned auto-complete patent.

As for the devices accused of infringing those patents, none are very recent models and many aren't even on the market anymore. However, the historical sales of each will affect the size of any award given by the court if an allegation is upheld. That's a lot of infringement for ultra-popular models like the Galaxy Note II, Galaxy S III, iPhone 5 and iPhone 4s, which have far outsold disputed models from the previous trial (like Samsung's original Galaxy S). Other names on the list include the Galaxy Nexus and Galaxy Tab 2 10.1 from Samsung, along with Apple's iPad 2, iPad with Retina display (3rd-gen), iPad with Retina display (4th-gen) and iPad Mini (the original, without a Retina display). Of course, there's always the upcoming negotiations between company CEOs to avoid all that, but... nah, who are we kidding.

In this article: apple, court, dispute, GalaxyNoteII, iPhone5, mobilepostcross, patent, samsung, trial
All products recommended by Engadget are selected by our editorial team, independent of our parent company. Some of our stories include affiliate links. If you buy something through one of these links, we may earn an affiliate commission.