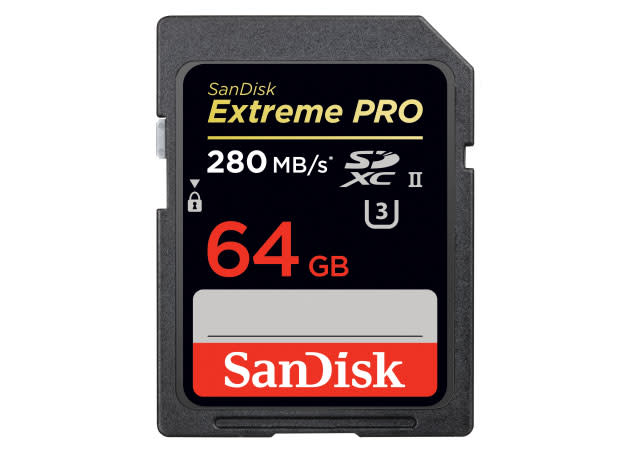 With affordable 4K cameras from Panasonic and Sony set to ship soon, it's time for flash memory manufacturers to begin readying stockpiles of high-speed SD cards. Today, SanDisk is announcing its latest flagship, the Extreme Pro SDHC/SDXC UHS-II. It exceeds the new UHS Speed Class (U3) spec, supporting continuous write speeds of up to 250MB/s. While the card is most appropriate for folks shooting 4K video, it'll also come in handy when you're snapping continuous RAW stills at high frame rates, letting you unload the camera's buffer just as quickly as you can fill it. The new cards will ship in April in 16GB to 64GB capacities, with prices ranging from $120 to $300. There's also a new U3 card reader that's designed to let you take full advantage of the SDXC card's 280MB/s transfer speeds. That device will also be available in April, with a $50 MSRP.

In this article: 4k, cpplus, cpplus2014, sandisk, sd, sdhc, sdxc, u3
All products recommended by Engadget are selected by our editorial team, independent of our parent company. Some of our stories include affiliate links. If you buy something through one of these links, we may earn an affiliate commission.