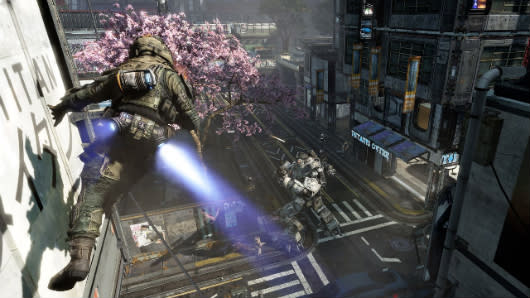 Microsoft dished out two videos that offer players some tips on Titanfall ahead of the game's beta, which starts tomorrow. The first video glosses over the game's basic mech-like Titan functions and elaborate on ways players can use the Titans effectively within combat. Additionally, it provides a few pointers for the parkour-like locomotion elements in the game, such as hanging on walls by holding the left trigger. The second video, found after the break, tours the game's three modes and their rules.

Titanfall is set to launch March 11 on Xbox One and PC with the Xbox 360 version following on March 25. We got an extended look at the game ourselves, and had plenty to say about it in our video preview.
[Image: Electronic Arts]

In this article: EA, ea-games, Electronic-Arts, hints, microsoft, pc, Respawn-Entertainment, tips, titanfall, tutorial, videos, xbox, xbox-one
All products recommended by Engadget are selected by our editorial team, independent of our parent company. Some of our stories include affiliate links. If you buy something through one of these links, we may earn an affiliate commission.