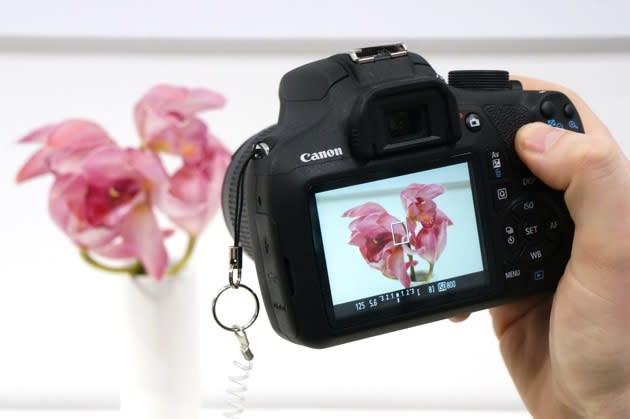 If you're angling to upgrade from your smartphone or your point-and-shoot to something a little more serious, you're probably not going to jump for the top model out -- unless you have that kind of money. That's where Canon's new entry-level DLSR comes in, with 18-55mm kit lens, for $550. The EOS Rebel T5 boasts an 18-megapixel sensor, ISO levels from 100-12800 and all the controls you'd expect to find on Canon's understandably popular DSLR series. As the entry-level model, however, there's bound to be some drawbacks -- and there were few that we noticed during our short playtime at CP+ 2014. With 9-point autofocus, you can expect some sluggish focusing: many DSLRs have 20 times the number of focal points. Once the camera does latch onto a subject, you can expect DSLR-quality shots.

The Rebel T5 also packs in a consecutive shooting mode, but at three frames per second (hold onto the shutter key while in the right mode, and it captures away), we were hoping for something more. Perhaps we've been spoiled by the leaps and bounds made by ILC cameras (including Canon's own) but the Rebel T5 is best seen as a gentle introduction to Canon's lens selection and those subsequent camera upgrades. 14
Zach Honig contributed to this report.
In this article: canon, cpplus, cpplus2014, dslr, eosrebelt5, rebelt5, video
All products recommended by Engadget are selected by our editorial team, independent of our parent company. Some of our stories include affiliate links. If you buy something through one of these links, we may earn an affiliate commission.