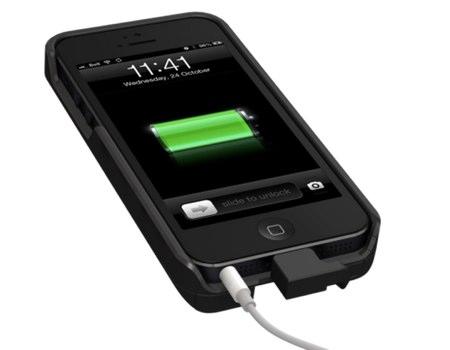 If you're considering an iPhone case that includes a battery pack, you've already decided that increasing the size of your device is a fair trade-off for more life, but that doesn't mean that all battery cases are created equal. The iBattz Mojo Refuel I reviewed previously increased the overall footprint of the device quite a bit, and while the myCharge Freedom 2000 also creates an overall more bulky handset, it's not quite as dramatic as some of its competitors.

Like many of the battery pack cases, the myCharge Freedom 2000 slaps the majority of its weight onto the rear of the device. The iPhone clicks into place easily and the case keeps a relatively firm grip on your phone.

There are cutouts for the camera, volume buttons, and silent switch, and a built-in lock button that, in theory, carries your button push through to the device below. Unfortunately, the button is flush with the case and can be a bit of a challenge to push. This is the one big issue I have with the case in terms of design, but it's not a deal breaker. The sides of the case are a semi-flexible hard plastic, while the rear of the case has either a matte feel or a slightly textured, glossy paint, if you choose one of the more colorful case options. The fit and finish of the case itself is very high, and it doesn't have the cheap toy feel that some cases fall victim to.

The most unique aspect of the Freedom 2000 case is that it has an open-bottom design, exposing the entirety of the device's bottom ports and speakers. This is great for people who want to recharge just the phone and not the case, and even allows the use of some docks without removing the case.

This case works slightly different than most; Rather than being permanently plugged into the iPhone's charging port, the Freedom 2000 requires you to plug the case into your phone whenever you need a little extra juice.

As far as iPhone charging cases go, the myCharge Freedom 2000 is one of the more unique options. The open-bottom design is great for users of docks and those who want to still get some use out of their lightning cables, and the exposed speakers means no muffled music or game sounds.

The lock button is my single sticking point, but it's a small price to pay for having what is essentially a full battery recharge available any time you need it.

Rating: 3 out of a possible 4 stars In this article: accessories, batteries, battery, case, charging, iPhone, mycharge, review
All products recommended by Engadget are selected by our editorial team, independent of our parent company. Some of our stories include affiliate links. If you buy something through one of these links, we may earn an affiliate commission.