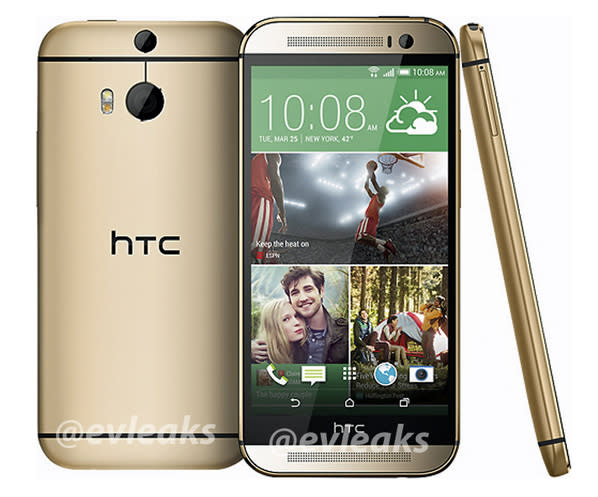 Is there anything that hasn't already been leaked about HTC's photography-focused successor to the One? Not much, except that we haven't seen publicity renders quite as detailed as the one just shared by @evleaks. It suggests that the dual-camera handset will be offered in a gold flavor when it arrives on March 25th, alongside the rumored silver and black options. Furthermore, the source -- who has a generally reliable track record -- claims to know how the new phone will be branded. It'll apparently skirt around tricky numerical conventions by adopting a slightly Apple-esque alternative: the "All New HTC One." A name like that should roll right off the tongue, shouldn't it?

Update: One of HTC's press and marketing guys has just responded to @evleaks with a big fat "LOL" in regards to the "All New" branding claim. Make of it what you will, but perhaps we could be looking at an "HTC One Two" after all.

In this article: allnew, allnewhtcone, evleaks, gold, htc, htcone, mobilepostcross
All products recommended by Engadget are selected by our editorial team, independent of our parent company. Some of our stories include affiliate links. If you buy something through one of these links, we may earn an affiliate commission.