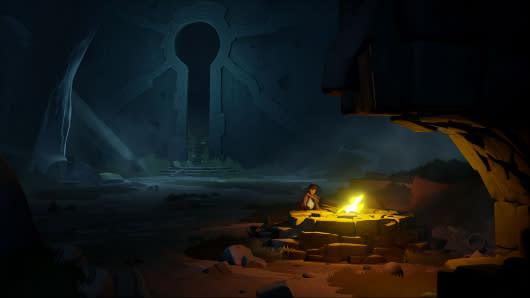 Microsoft rejected Rime, the colorful action RPG from Deadlight studio Tequila Works, before the team signed a PS4-exclusive deal with Sony, VG Leaks reports, citing a series of Microsoft pitch documents. Microsoft Studios Corporate VP Phil Spencer considers this decision a missed opportunity, according to a few of his tweets.

The Microsoft pitch describes Rime as "Gauntlet meets Minecraft meets Jason and the Argonauts." Tequila Works sought partial funding from Microsoft and estimated the cost of developing Rime for XBLA at $3 million. The game would have been "fully exclusive" to XBLA. Rime, which was originally called Echoes of Siren, is a third-person crafting, survival, open-world action game first announced at Sony's Gamescom press conference as a PS4 exclusive.

Asked on Twitter why Microsoft rejected Rime, Spencer said, "Part of job is living with mistakes. Passed on Guitar Hero ... I can list many misses regretfully. I try to focus on what we did ship."

A second user tweeted at Spencer, suggesting that Xbox One could use a game like Rime. Spencer replied, "We'll miss some, nature of the beast, it's why I don't hate when games ship elsewhere. Cool to see team's idea turn into [a] great game."
[Image: Sony]
In this article: microsoft, playstation, ps4, rime, SONY, tequila-works, xbox-one
All products recommended by Engadget are selected by our editorial team, independent of our parent company. Some of our stories include affiliate links. If you buy something through one of these links, we may earn an affiliate commission.