EE Kestrel review: a good low-cost 4G phone, but with a Moto on its back 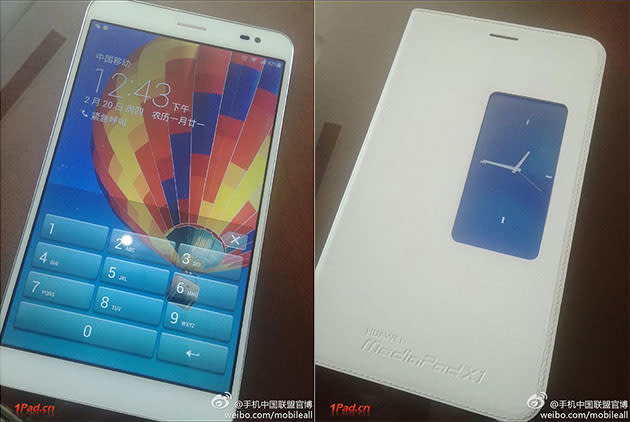 A few cats have escaped from Huawei's bag ahead of Mobile World Conference, namely images of its 7-inch MediaPad X1 and mid-range Ascend G6 handset. A Chinese Weibo site nabbed live pics of the MediaPad X1, and thanks to a previous visit through China's FAA, we know its specs: quad-core 1.6GHz HiSilicon 910 CPU, 2GB of RAM, 16 GB memory, a 1,920 x 1,200 display and a 6,000 mAh battery. It's also reported to have telephonic capabilities for those with headsets (or no shame), and optional LTE. Interestingly, the pics also show a faux-stitched smart cover with a secondary display, à la Samsung's S View. All that puts it on the high-end side, and the coup de grace would be a rumored price tag of around 1,200 Yuan (about $200), which we imagine would be sans LTE or the cover.

Meanwhile, rumor-monger @evleaks has outed pics of Huawei's Ascend G6 smartphone (after the break), a 4.5-inch model said to have a quad-core 1.3GHz MediaTek chip, 1GB of RAM, Android 4.2 Jelly Bean and an 8-megapixel front / 5-megapixel rear camera. Its standout feature is a slim 7.5mm profile, but it otherwise seems destined for bargain shoppers. We know nothing else about pricing and availability, of course, but we imagine we'll find out soon at MWC 2014 -- which is shaping up to be rather epic.

Update: Huawei just tweeted an image (embedded after the break) to tease the four devices it will be announcing at MWC. It looks like the X1 and the G6 are listed there, along with a larger stereo-sounding tablet and a mobile hotspot. But where's the smartband? In this article: AscendG6, Huawei, leak, MediaPadX1, MWC2014, rumor
All products recommended by Engadget are selected by our editorial team, independent of our parent company. Some of our stories include affiliate links. If you buy something through one of these links, we may earn an affiliate commission.