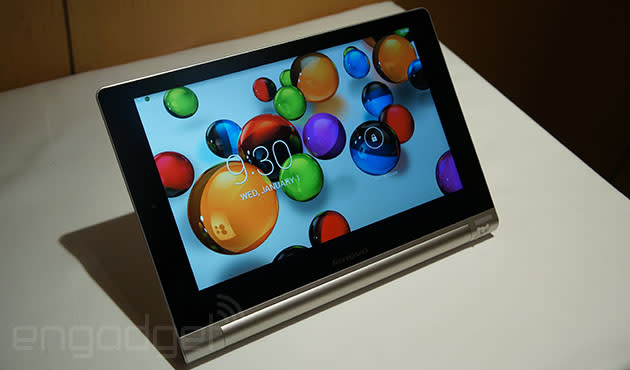 While Lenovo's original Yoga Tablet had marathon-like battery endurance, an interesting design and a good price, it also had the muscle of a marathon runner, thanks to weak specs. However, the company just launched the Yoga Tablet 10 HD+ at MWC 2014 with a much more desirable set of components. For starters, it's got a 1,920 x 1,200 screen, a quad-core 1.6GHz Snapdragon 400 processor, 2GB of RAM and an 8-megapixel front camera. Those are all big steps up from the previous model's 1,280 x 800 screen, 1.2GHz MediaTek processor 1GB RAM and 5-megapixel camera. Meanwhile, the new Yoga has retained its rather monstrous 9,000mAh battery, meaning it still has an impressive 18 hours of battery life, according to Lenovo. Read on for more of our impressions and video. 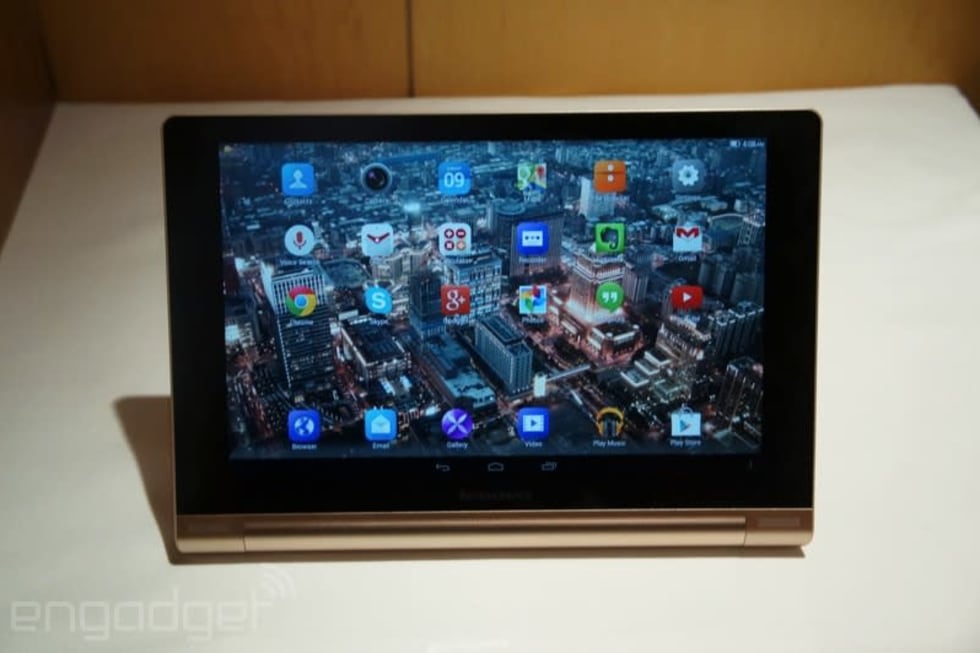 During our brief time with Yoga Tablet 10 HD+, we found the fit and finish to be nice enough, thanks to the aluminum and chrome body. On top of silver, there's now a champagne-colored model that'll only come to the Asian market. Lenovo's changed the kickstand angle a bit, making it a bit easier to use flat for typing. Happily, the front camera is now positioned in the center of the screen, making self-portraits less awkward. As for performance, the tablet now seemed zippy enough running Android 4.3, an impression we didn't have at all from the last model. Lenovo also said it spent some effort improving the optional $59 keyboard, giving it improved stability and feel. All those improvements add up to a relatively small bump in price to $349, 50 bucks more than the original Yoga Tablet 10. The silver model will arrive to markets in the US and Europe in June.

Meanwhile, Lenovo also announced its DOit software suite, which pulls together some existing and new apps into one suite. The first app, SHAREit, is positioned at those who might need to swap files in places where there's no central WiFi network. To do that, it creates an ad-hoc group between devices, allowing P2P sharing of contacts, photos and other files. Lenovo said it would also be coming to iOS and Windows devices soon. Meanwhile, SECUREit is an anti-malware and privacy app and SYNCit can backup and restore SMS message, phone logs and contacts. The company has also shored up its photo software with the SNAPit, a camera app that brings 10fps burst speeds and photo filters that can be previewed and applied before shooting, among other features. Finally, there's the SEEit app to store and edit all those snaps. The entire DOit suite is now available on Google Play for most Android devices.

In this article: lenovo, lenovoyoga, lenovoyoga10hd+, lenovoyoga10hdplus, yoga10HD+, yoga10hdplus
All products recommended by Engadget are selected by our editorial team, independent of our parent company. Some of our stories include affiliate links. If you buy something through one of these links, we may earn an affiliate commission.