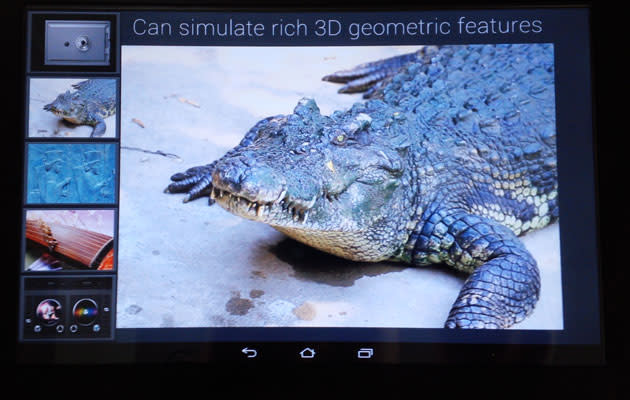 Back in 2012, we were all excited at the idea of haptic technology -- touch screens that fool you into thinking that you can feel what's on display. As quickly as we saw Senseg and NEC's implementations, however, haptic fell out of the mainstream. Now, however, Fujitsu is working on an ultrasonic system, that varies the friction between your finger and the glass, which could be ready for prime time. In the demonstration, users are apparently able to pluck the strings of a Japanese harp, turn a combination lock and even stroke an Alligator. The company has knocked together a prototype in time for MWC, and Fujitsu has a goal to get the tech into commercial hardware by 2015 -- assuming, of course, that realistic lizard stroking is the one feature you've been waiting for.

In this article: 2014, Fujitsu, Haptic, mobilepostcross, MWC, MWC2014, Prototype, Tablet
All products recommended by Engadget are selected by our editorial team, independent of our parent company. Some of our stories include affiliate links. If you buy something through one of these links, we may earn an affiliate commission.