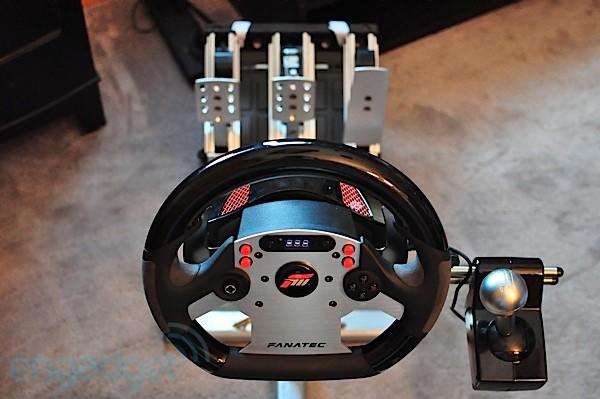 A force-feedback steering wheel. It's quite literally the stuff of racing games, and AT&T labs, along with Carnegie Mellon, is researching the possibly of throwing similar tech into your real-world whip. MIT's Technology Review recently highlighted the project, which uses 20 vibrating actuators shoved inside of a steering wheel to create a variety of patterns -- a counter-clockwise sequence could indicate a left turn, for example. As you might have guessed, one of the goals is to keep drivers less distracted by the likes of visual turn-by-turn GPS navigators and more focused on the road. While it's currently being tested with driving simulators, the results are positive so far, if a bit modest. When supplemented with typical audio / visual navigation, folks near the age of 25 kept their eyes planted on the asphalt for 3.1 percent more time than without it. Notably, the improvement wasn't found with those over 65 in the aforementioned instance, however, supplemented with just the audio, the vibrating wheel had them focusing on the road by an increase of four percent.

According to Technology Review, this isn't the first time haptic feedback has been tested as a driving aid, although past tests have, notably, resulted in "fewer turn errors" by those behind the wheel. Best of all, the tech is capable of sending more than just navigation cues -- it could certainly be useful in a Telsa. So when can you expect to find a force-feedback steering wheel in your ride? Technology Review cites Kevin Li, an AT&T Labs researcher on the project, who says the main hurdle is making something that people will just "get," and that it's still "years" away from becoming a possibility. While there's no photos of the setup just yet, a full report on the research will get released in June. Hey, there's always Forza and Gran Turismo, at least for now -- right?
In this article: att, att labs, AttLabs, feedback, force feedback, ForceFeedback, haptic, haptic steering, HapticSteering, Kevin Li, KevinLi, research, SeungJun Kim, SeungjunKim, steering wheel, SteeringWheel, tun-by-turn navigation, Tun-by-turnNavigation, vibration, wheel
All products recommended by Engadget are selected by our editorial team, independent of our parent company. Some of our stories include affiliate links. If you buy something through one of these links, we may earn an affiliate commission.
Share
Tweet
Share